It’s Giveaway time! Get a free bonus entry into our weekly raffle and check out VanOps: The Lost Power by Avanti Centrae 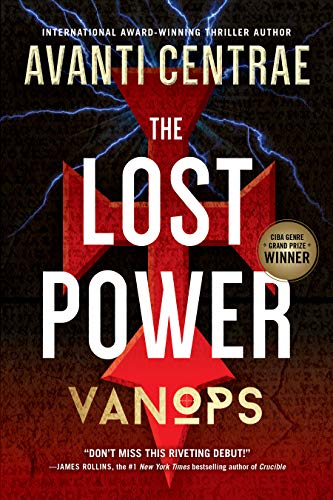 “Avanti Centrae’s VanOps: The Lost Power opens a tantalizing new series that combines historical mystery and cutting-edge science into a masterwork of international intrigue–with the promise of more to follow. Written with a dynamic, cinematic style and full of action and suspense, here’s a book that defines page-turner. Don’t miss this riveting debut!” ~ James Rollins, the #1 New York Times bestselling author of Crucible

“VanOps: The Lost Power takes readers on a fast-paced roller coaster of a ride across the globe in a top-notch thriller with high-stakes and plenty of edge-of-seat action.” ~Robin Burcell, NYT bestselling author of The Last Good Place and (co-written with Clive Cussler) The Oracle.

Spain 1057: During a thunderous battle, the first King of Aragon wrestles Alexander the Great’s priceless Egyptian weapon from the Moors, but finds it holds a terrifying and mysterious power.

Nearly a thousand years later, on a fog-shrouded Napa Valley morning, gunshots and the clatter of breaking glass rip through the silence. Maddy Marshall, an app designer with special martial-arts abilities, and her twin brother, Will Argones, quickly run toward the sound. Horrified, they discover a sniper has cut down two members of their family.

Before the pool of blood on the living room floor is dry, their father sends the twins on a dangerous quest to recover Alexander’s ancient weapon. Joined by a broad-shouldered friend who harbors a secret alliance with VanOps, an ultra-black covert agency, they soon discover the lethal sniper is from Russia.

They follow time-worn clues from a medieval Spanish castle to a lost warren under the streets of Jerusalem, racing to unlock the secrets that will lead them to an arcane power–before a hostile state seizes the power and cripples the United States.

To survive, they must go undercover and off-grid. No place is safe, a wrong move means death, and even a simple phone call is off limits. Because now, the sniper has his sights set on them.

Fans of Dan Brown, Clive Cussler, Steve Berry, and James Rollins will devour the pages of this instant #1 Barnes and Noble best seller.

THE LOST POWER is the first book in the fast-paced, multi-award-winning VanOps thriller series. If you enjoy smart edge-of-your-seat suspense, you’ll stay up late turning the pages of Avanti Centrae’s high-stakes novel.

Go to Giveaway Central to enter and to say thank you here is a bonus entry word: power