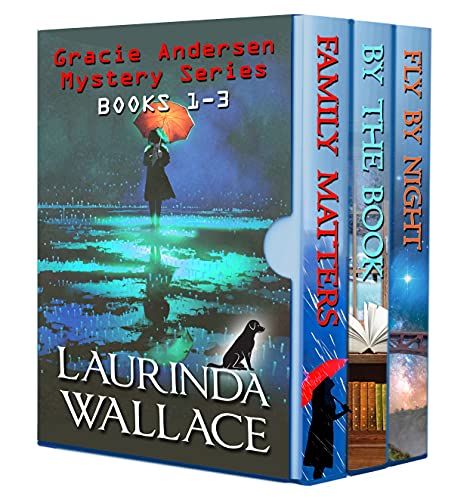 – Learn More
Text-to-Speech and Lending: Enabled
See more titles by Laurinda Wallace
Here’s the set-up:
Gracie Andersen Mysteries Box Set One
A clean read. No strong language, sex, or graphic violence. A perfect weekend binge read.
Gracie Andersen is starting over again after the tragic death of her husband. As a co-owner of the new Milky Way Kennels, she has plenty to keep her busy. Her hometown of Deer Creek is filled with family and friends ready to help her–sometimes a little too much. With Haley, her precocious Labrador tagging along, Gracie discovers she has a knack for solving mysteries.Family Matters
When Gracie receives her late cousin Charlotte’s diary as a gift, questions immediately arise about Charlotte’s untimely death in an unsolved hit-and-run accident 20 years prior. Family and friends warn her to let sleeping dogs lie, but when death strikes again, Gracie is determined to uncover the truth. The long-buried family secret leads Gracie and Haley into real danger as a killer is once again on the prowl.

By the Book
The winter temperatures are brutal in Deer Creek, but things heat up when Gracie helps the new librarian settle into village life. She soon discovers that no good deed goes unpunished when a frozen body, an antique knife, along with accounting irregularities at the Deer Creek Library converge. Who killed the library’s treasurer? Who is stalking the new librarian and why? In trying to help, Gracie finds she’s become a target as well.

Fly by Night
A heated community meeting about a proposed windfarm erupts into violence and the next day a windfarm supporter turns up dead. The local UFO aficionado who opposes windmills is law enforcement’s chief suspect, but Gracie isn’t so sure they’re right. She finds plenty of other suspects and motives to consider. Is it politics? Money? Personal? Or all of the above? A peculiar, former classmate shows up offering to help with the investigation, and her irritating cousin, Isabelle accidently rounds up the suspect pool at an elegant soiree. Then things really get interesting.

Go to Giveaway Central to enter and to say thank you here is a bonus entry word: cozy