It’s Giveaway time! Get a free bonus entry into our weekly raffle and check out Heart Full of Lies: A True Story of Desire and Death by Ann Rule

Heart Full of Lies: A True Story of Desire and Death 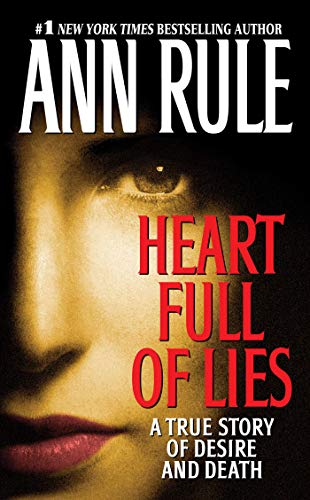 4.6 stars – 466 reviews
Kindle Price: $1.99
Supports Us with Commissions Earned
Text-to-Speech: Enabled
Available on Audible
See more titles by Ann Rule
Here’s the set-up:
In perhaps the most profound character portrait she has ever drawn, America’s bestselling true-crime writer, Ann Rule, asks, Can the female really be deadlier than the male? In Heart Full of Lies, she answers that question in one of her most intriguing tales ever — a riveting story of seduction, betrayal, and murder.
Liysa and Chris Northon seemed the epitome of idyllic lovers when they married on a moonlit beach in Hawaii. Their friends admired the romantic couple: Chris — tall, athletic, handsome with a thatch of blond hair, a pilot for Hawaiian Airlines — and Liysa — attractive, charismatic, seductive, an acclaimed surf photographer, with a tanned, perfect body. Their son, Bjorn, looked just like his dad, and they were raising Liysa’s son by a previous marriage. They had beautiful homes on the mainland and in Hawaii.
But it wasn’t long before Chris saw a side of Liysa that he hadn’t glimpsed before. Nothing was quite enough for her — she wanted more money, more property, and a future that included fame as a Hollywood screenwriter. She complained to her closest friends that her husband was a heavy drinker who beat her. The marriage seemed to be unraveling, but Chris struggled to hold it together, afraid he’d be separated from Bjorn and from Liysa’s son, Papako. And then the worst happened.
On a sunny morning in October 2000, Chris Northon lay dead in a sleeping bag at a campsite beside a pristine river, while his wife drove four hours to a friend’s house, sobbing inconsolably. She appeared to have been beaten, and had a black eye and bruises on her knee. Was Chris’s death a tragic accident or a deliberate homicide? Was Liysa involved? Questions arose that made Oregon State detectives suspicious, yet her family and friends stood staunchly by her, incredulous that anybody would ask such questions.
Ann Rule became involved with the mystery of Chris’s death when one of his fellow pilots at Hawaiian Airlines contacted her, and only later did she learn that the ranking Oregon State Police investigator had thought of her to tell this bizarre story. A book that leads the reader from Hawaii to the Northwest to Hollywood, Heart Full of Lies is an extraordinary character study as well as a brilliant investigative report that will keep you enthralled to the very last page.

Go to Giveaway Central to enter and to say thank you here is a bonus entry word: heart