It’s Giveaway time! Get a free bonus entry into our weekly raffle and check out Cursed: A Regan Reilly Mystery by Carol Higgins Clark 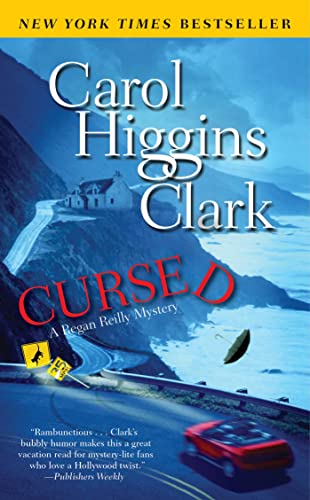 4.4 stars – 268 reviews
Kindle Price: $1.99
Supports Us with Commissions Earned
Text-to-Speech: Enabled
Available on Audible
Enjoy Carol Higgins Clark Books? Tell us why and WIN a chance for a FREE ebook!
Here’s the set-up:

Private Investigator Regan Reilly moved from Los Angeles to New York City when she married her husband, Jack “no relation” Reilly, head of the NYPD Major Case Squad. To help a friend she ends up taking on a case that calls her back to her old stomping ground…

Cursed opens on a cold and gray January morning. Sleet and snow are swirling as Regan arrives at a warehouse in Long Island City with a trunk full of her old case files from Los Angeles. After carting all her boxes into a storage unit, she heads back out into the snow, and her cell phone rings.

Abigail Feeney, a young woman who had lived across the hall from Regan in an apartment complex in the Hollywood Hills, is on the line. Abigail believes her life has been cursed since birth. She was born on Friday the 13th of January, and her parents gave her a name with 13 letters. A hairdresser on movie sets, Abigail was recently injured at work when a piece of scaffolding fell and knocked her over, and her arm was broken in two places. But that isn’t why she is calling. “Regan!” she exclaims. “The ‘no good bum’ has been spotted in town. I desperately need the money he owes me. Can you please come out here and help me find him?”

Regan immediately knows the identity of the “no good bum.” From her L.A. apartment, Regan had often seen Abigail’s ex, Cody Castle, sitting by the pool, bent over his cell phone, text messaging nonstop. Before he disappeared three months ago, he borrowed $100,000 from Abigail. He promised to pay her back in three months.

“Yes! My grandmother is flying here tomorrow. There’s a condo she wants to buy me. But we need that money. She can’t find out I don’t have it. Regan, can’t you spend a few days with me?”

If Regan weren’t freezing, she might have made an excuse. But Jack was away at a seminar, Regan had never liked the “no good bum,” and Abigail had brought her chicken soup when she’d had the flu last winter. Within hours Regan is on a flight to Los Angeles where her adventure with Abigail will take her from the beaches of Malibu, to the mountains north of the city, to the renovated lofts of downtown L.A.

Regan starts to feel Abigail’s curse is contagious as she encounters a cast of characters who aren’t always welcoming. Some are downright dangerous. And there’s one who is the most dangerous of all…

Go to Giveaway Central to enter and to say thank you here is a bonus entry word: cursed