From The Atlantic: Before she died, Emily Hale donated love letters she had received from the author while his wife was ill. Now public, the writings reveal his quiet duplicity. 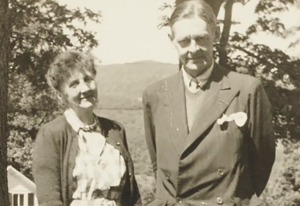 “The question is not does love exist / But when she leaves, where she goes.” What’s that—something from Four Quartets? Actually it’s “Secrets,” by Van Halen. But how elegantly it expresses the problem. What happens to the love gone cold? All that madness, transport, froth, projection, communion—where does it go? With the source extinguished, do its beams still travel, like light from a snuffed-out star? Or does it dissipate entirely into unreality?

For a long time, T. S. Eliot was in love—chastely, unconsummatedly—with a woman who was not his wife, a woman named Emily Hale. Then, overnight as it seemed, he wasn’t. For 17 years, she in America and he in England, they had been maintaining an intense, and intensely sublimated, attachment. They wrote hundreds of letters. They saw each other infrequently, and behaved, when they did, with appalling propriety. And then, in 1947, it was over: “A mutual affection that he and I have had for each other,” she wrote to a friend, with typical restraint, after a visit from Eliot, “has come to a strange impasse.”

With hindsight (and the glibness of posterity) perhaps not so strange. Eliot’s first wife, the erratic Vivienne, had just died in a mental hospital at the age of 58. Their marriage had made him so miserable that he wrote The Waste Land, and he hadn’t seen her since 1935, but they never divorced—his brand of ascetic Anglicanism would not permit it. And with the shock of Vivienne’s death, the peculiar constellation of yearnings and prohibitions that had sustained his love for Emily Hale was dissolved. Thanatos took down Eros. Just like that. Ten years later, when Hale learned that Eliot had remarried, she broke down. “She went into the Massachusetts General Hospital,” writes Lyndall Gordon in T. S. Eliot: An Imperfect Life, “complaining of dizziness, and was investigated for a brain tumour, but the doctors found nothing.”