Step Aside, Nicholas Sparks! 75 out of 81 Rave Reviews for Sebastian Cole’s Story of Undying Love 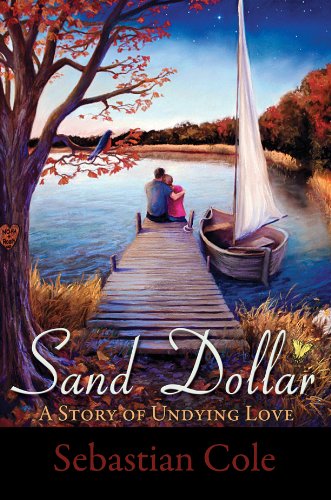 “SAND DOLLAR is one of those rare books that makes you feel, laugh and cry all at the same time. This smashing debut by Sebastian Cole reads like the best of Nicholas Sparks with just enough schmaltz. Moving and emotive, it’s every bit THE NOTEBOOK done up for summer.”
— Jon Land, bestselling author of STRONG AT THE BREAK

“So to the hopeless romantics out there I say, Highly Recommended – have at it, this is a must-read. To the snarling cynics like me who mentally have their arms akimbo and their eyebrow raised, I say pick up Sand Dollar: A Story of Undying Love and surprise yourself by discovering the romantic in you.” — BookIdeas.com
“Sand Dollar, a fantasy romance by Sebastian Cole, lives up to its subtitle, A Story of Undying Love… bookreview.com considers Sand Dollar an excellent romance novel and looks forward to reading more from Sebastian Cole.” — BookReview.com
“Sand Dollar: A Story of Undying Love is Sebastian Cole’s debut novel, but I think he will have a long list of best sellers if he keeps going at this rate. It will renew your faith in finding and keeping that one true love.” — Kate Patrick

Sand Dollar: A Story of Undying Love is an epic, heart-wrenching love story about the one who got away. It is best described as a romantic fantasy, kind of like The Notebook with a Sixth Sense twist. Similar to a Nicholas Sparks novel, but uniquely different, Sand Dollar is a thought-provoking, emotional read with real life situations that might even have you yelling at the main characters at times. And not only is it filled with plenty of twists and turns, but the ending will knock your socks off!

Born and raised in New England, Sebastian Cole joined his family’s business after graduating from Brown University in the 80s. A true romantic, his life is defined by following his heart and pursuing his dreams, which is why he has become a novelist. Sebastian writes from the heart, believing in true love, love at first sight, and finding the one person in life you’re meant to be with.Sebastian’s debut novel, Sand Dollar: A Story of Undying Love, has won numerous awards, including being a winner in the Beverly Hills Book Awards, a finalist in the ForeWord Firsts debut literary competition for first-time authors, and a current finalist for ForeWord Reviews Book Of The Year Award. Sand Dollar was on the cover of Publishers Weekly on March 25, 2013. With a rating of 4.6 stars, the book has been getting rave reviews, many of which compare him to his favorite author, Nicholas Sparks. Whether or not Sebastian ever achieves that kind of success, touching the lives of others through his writing has been the single most gratifying thing he has ever done in his life.

And here, in the comfort of your own browser, is your free sample of Sand Dollar: A Story of Undying Love by Sebastian Cole: