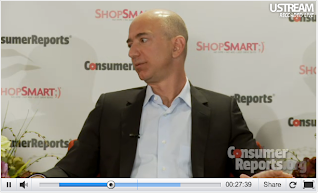 “More and more, over time, people are going to be buying from tablet computers. They’ll lean back on their sofas…. That’s very exciting for us. It gives us a new environment to experiment and invent in. “

First, we’re very pleased and excited to announce that we’ve arranged for podcaster extraordinaire Len Edgerly of The Kindle Chronicles to live-blog Amazon’s 10 a.m. Wednesday press conference announcing the new Kindle Tablet, a.k.a. the Kindle Fire, for Kindle Nation readers at http://bit.ly/LEN-LIVE-FROM-NY-ON-KTAB. Len promises to start posting as he travels to New York via Amtrak later today, and the action will really heat up shortly before 10 a.m. Wednesday, which is when we expect Jeff Bezos to take the stage at Stage 37 in New York.

So we’ll be covering the big announcement from multiple vantage points. You can follow Len’s live blog here, we’ll be gathering all the key information on our Kindle Nation Daily blog, and we’ll send out an email to our thousands of opt-in email subscribers when the Kindle Fire is available for pre-order.

Here are some of the questions we expect to see answered, and you can count on us to pass the answers on to you as soon as we have them. The “best guess” answers below come from a variety of sources and our own brain cells, but they will all be replaced with hard information tomorrow morning.

But here’s the bottom line for the Kindle Fire:

There is an understandable tendency, when new products like the Kindle, the iPad, and the Kindle Fire are launched, for many of us to focus too narrowly at first on hardware specs and feature sets. It is important to remember that it wasn’t only hardware features that set the Kindle Revolution aflame, it was Amazon’s remarkable edge in each of the 4 C’s of customer base, catalog, convenience and connectivity. The Kindle capitalized dramatically on each of those unfair edges, and so will the Kindle Fire.

No single competitor can touch Amazon in more than one of these areas.

What are some of the other questions you’d like to see covered?

Publetariat Dispatch: Resources For Young Writers
Kindle Nation Bargain Book Alert: Michael Scott Miller’s LADIES AND GENTLEMEN … THE REDEEMERS is our eBook of the Day at just 99 Cents with 4.6 Stars on 16 Reviews, and Here’s a Free Sample!

3 Responses to Great Expectations and Kindle Fire: What to Look Forward to with Wednesday’s Kindle Tablet Press Conference