And for the next week all of these great reading choices are brought to you by our brand new Thriller of the Week, Robert Cook’s Cooch. Please check it out!

Winner of the e-Lit Gold medal for best national thriller 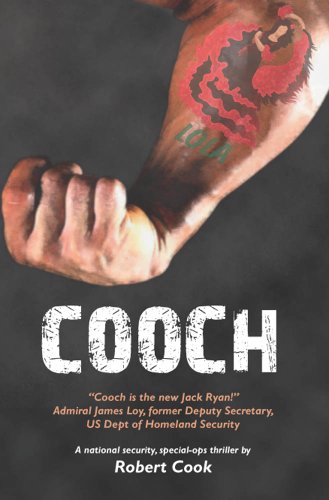 4.4 stars – 23 Reviews
Kindle Price: $3.45
Or currently FREE for Amazon Prime Members Via the Kindle Lending Library
Text-to-Speech and Lending: Enabled
Don’t have a Kindle? Get yours here.
Here’s the set-up:
Alejandro Mohammed Cuchulain, called Cooch or Alex, became a Marine at sixteen and a CIA special-operations trainee at 17. His father is a wheel-chair bound former Marine and Medal of Honor winner who gives Alex advice as to how to survive in a violent world. His mother is the daughter of a Bedouin sheikh who sends a young Alex off, during his summer breaks, to experience the Bedouin life. The combination of a very young start in learning the art and craft of violence, combined with a thirst for knowledge combine to help him to become both a noted designer and user of explosives and an expert in Islamic affairs. Violent, yet thoughtful, Cooch represents the best in fast-moving, popular thrillers.
5 Star Amazon Review
I enjoy a fast paced action thriller and Cooch delivers. Cooch is a very educated, physically strong, highly trained special-ops hero. Bob Cook provides details and nuances that give Cooch and the supporting characters credibility. This is the kind of read that makes you wonder who will play Cooch in the movie. If Vin Diesel got a PHD or Matt Damon plumbed iron for 6-months, they could qualify.
About The Author

Robert Cook is a United States Army Vietnam veteran, who attained the rank of Major and holds the parachutists badge, Bronze Star Medal and the Army Commendation Medal.

Cook was named the Ernst and Young Entrepreneur of the Year for the Metropolitan Washington, DC Region in 1987.

Mr. Cook is an active philanthropist. He endowed the Robert E. Cook Honors College of Indiana University of Pennsylvania that was recently covered in Donald Asher’s book, “Cool Colleges for the Hyper Intelligent, Late Blooming and Just Plain Different”. www.iup.edu/honors