Like A Little Romance?
Then you’ll love our magical Kindle book search tools that will help you find these great bargains in the Romance category:

And for the next week all of these great reading choices are sponsored by our Brand New Romance of the Week, Bonnie Vanak’s The Falcon & the Dove, so please check it out!

The Falcon & the Dove (Khamsin Warriors of the Wind) 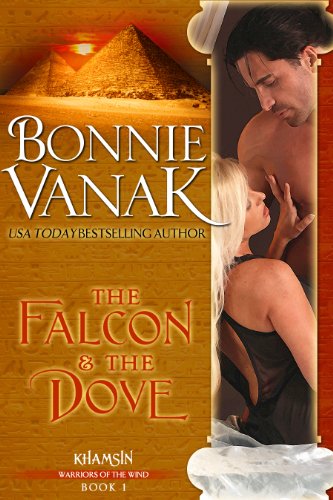 4.7 stars – 7 Reviews
Kindle Price: 99 cents
Text-to-Speech and Lending: Enabled
Don’t have a Kindle? Get yours here.
Here’s the set-up:
THE LEGEND
In the 18th Dynasty of Egypt, there was born a love that could never be broken – that of a young queen and a great warrior. And while the warrior’s duty to combat the infidel was strict, and though his beloved was the wife of pharaoh, the two would be separated only by death. And then only for a time.

THE LOVERS
Elizabeth Summers came to the dig at Akhetaten in 1892. Great things were being discovered! English archaeologists had made huge advances and Egypt’s fantastic history was being laid bare. But Elizabeth was not destined to simply study history – she was to be a part of it. Swept away by desert raiders, the pale beauty found herself in the arms of a great sheikh. And while Elizabeth didn’t know whether she was the reincarnation of an ancient queen, she realized that in this man’s arms she had found her destiny.
Reviews

“A fast-paced novel that is hard to put down.” — THE BEST REVIEWS

“This story is a lot of fun and excitement. It is pretty darn sensual too with some sizzling love scenes.” — New & Previously Owned Books

“This timeless love story will keep you enthralled. A great mix of adventure and romance makes this a delicious read.” — Rendezvous

I’m the author of Egyptian historicals and werewolf paranormal romance novels. You can find excerpts and book information on my website, www.bonnievanak.com

On the self-publishing front, I have a new series called Werewolves of Montana. The first is a short story called The Mating Chase. The second book is The Mating Hunt and it is also available in a new boxed set with five other authors called Dark and Dangerous. The Mating Seduction, Book 3, will be out Oct. 31, 2013.

I also write paranormal romance for Harlequin Nocturne. The latest mini series is called the Phoenix Force, featuring Navy SEALS with paranormal abilities. The first book is The Covert Wolf and is about Matthew Parker, a werewolf who first makes a guest appearance in Taken by the Alpha Wolf. This is the short story where Matt first get the idea to join the Navy and become a SEAL.

I also self-published The Patriot’s Conquest, a new, original historical about an American patriot prior to the American Revolution. My backlist Egyptian historicals are now available on Kindle. These are The Falcon and the Dove, The Tiger & the Tomb, The Cobra & the Concubine, The Panther & the Pyramid, The Sword & the Sheath, The Scorpion & the Seducer and The Lady & the Libertine.