In the fires of World War II, a child must save his people from darkness… The Book of Uriel: A Novel of WWII by Elyse Hoffman

The Book of Uriel: A Novel of WWII 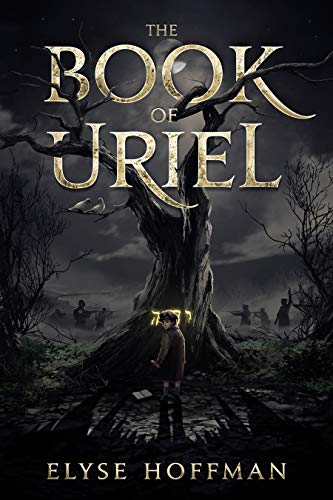 In the fires of World War II, a child must save his people from darkness…

Ten-year-old Uriel has always been an outcast. Born mute in a Jewish village known for its choir, he escapes into old stories of his people, stories of angels and monsters. But when the fires of the Holocaust consume his village, he learns that the stories he writes in his golden notebook are terrifyingly real.

In the aftermath of the attack, Uriel is taken in by Uwe, a kind-hearted linguist forced to work for the commander of the local Nazi Police, the affably brutal Major Brandt. Uwe wants to keep Uriel safe, but Uriel can’t stay hidden. The angels of his tales have come to him with a dire message: Michael, guardian angel of the Jewish people, is missing. Without their angel, the Jewish people are doomed, and Michael’s angelic brethren cannot search for him in the lands corrupted by Nazi evil.

With the lives of millions at stake, Uriel must find Michael and free him from the clutches of the Angel of Death…even if that means putting Uwe in mortal danger.

“This book grabs you from the start. What starts as a heartbreaking opening quickly turns to a ray of hope. Angels, both good and bad, the Nazis, a reluctant linguist, and one unlikely hero populate this story…the pacing is perfect, and you get so wrapped up in the story once you start. The descriptions make you feel like you’re in the story itself, and I definitely recommend this!”–The Faerie Review

The Book of Uriel is a heartbreaking blend of historical fiction and Jewish folklore that will enthrall fans of The Book Thief and The World That We Knew.