FREE today: a chilling psychological thriller by the WSJ-bestselling author of Silent Child…. One For Sorrow (Isabel Fielding #1) by Sarah A. Denzil

One For Sorrow (Isabel Fielding Book 1)

by Sarah A. Denzil 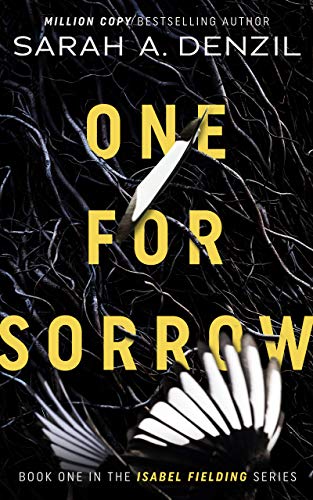 4.4 stars – 970 reviews
Kindle Price: FREE!
Everyday Price:
Text-to-Speech and Lending: Enabled
Available on Audible
Enjoy Sarah A. Denzil Books? Tell us why and WIN a chance for a FREE ebook!
Here’s the set-up:
A chilling psychological thriller by the million-copy bestselling author of Silent Child.

Within the walls of the high-security psychiatric facility, Crowmont Hospital, reside many violent offenders. To nurse Leah Smith, no matter what, all offenders are patients first and foremost. When Leah is appointed as nurse to Isabel Fielding, she is determined to remain professional despite the shocking crime Isabel allegedly committed in her past.

As Leah spends time with Isabel, she comes to know her as a young woman with a sweet, gentle nature, someone she could never see as a murderer. Leah begins to suspect members of the Fielding family of framing Isabel as a young girl, and she’s not the only one. True crime blogger James Gorden thinks Isabel is innocent too.

Is Leah allowing her own dark past to taint her judgement as she grows closer to her patient? Or has a young woman been unjustly robbed of her childhood?