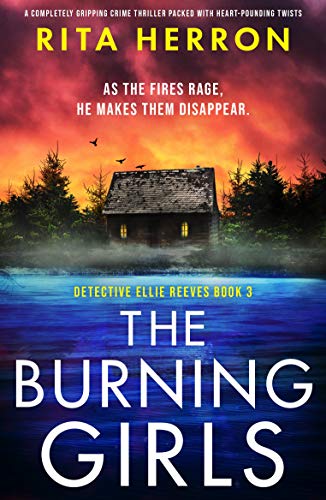 4.5 stars – 1,086 reviews
Kindle Price: 99 cents
Everyday Price:
Text-to-Speech: Enabled
Available on Audible
Enjoy Rita Herron Books? Tell us why and WIN a chance for a FREE ebook!
Here’s the set-up:
“WOW!!! JUST WOW!!!… OMG!!!!! What did I just read!!?!?!?… I could not put this book down… It was 3am and I finished the book without even noticing the time!!… Compelling and gripping… Honestly, just Wow!!… A mind-blowing, page-turning, explosive thriller that will keep you up at night. Bookworm86, ⭐⭐⭐⭐⭐

The girl was beautiful, even in death. Her skin was translucent beneath the sliver of moonlight peeking through the bare branches of the surrounding pines, and her chestnut hair had tumbled around her pale shoulders. Around her, smoke twisted in the air, curling into the inky sky.

The remote town of Crooked Creek has barely recovered from its most recent tragedy when wildfires tear through the mountains. Detective Ellie Reeves is grappling with her own heartbreak––she has just discovered she was adopted and that her childhood was a lie.

Under the scorching summer sun, Ellie is called to a river where a body has been found. She spots a lone woman’s shoe caught in a nearby tangle of vines, and a pearl necklace scattered by the water’s edge. The remains are surrounded by a circle of stones, which Ellie is certain means something. Was the victim––whoever she was––caught in the fire or is something more sinister at play?

The Fourth of July usually means festivals and fireworks, but when another body turns up the town is left in tatters. A young girl with dark hair lies dead, surrounded by stones, smoke drifting in the air. Thanks to an engraved silver necklace, Ellie identifies the body as eighteen-year-old Katie Lee Curtis, and the diary she finds hidden under the teenager’s mattress could get her close to the killer.

With two victims in less than twenty-four hours, it’s clear Ellie’s up against a serial killer, and she vows that no more innocent girls will be sacrificed. For her, every day is a battle to come to terms with her past, but when this case becomes personal, will she win?

A totally gripping and utterly addictive page-turner that will have you racing through and reeling at the twists. Perfect for fans of Melinda Leigh, Lisa Regan and Kendra Elliot, it’s best read with the lights on!