Ten years ago, Sally had her world ripped away from her – now she’s taking it back… When The Children Return (Children of the Eye Book 2) by Barry Kirwan

When The Children Return (Children of the Eye Book 2) 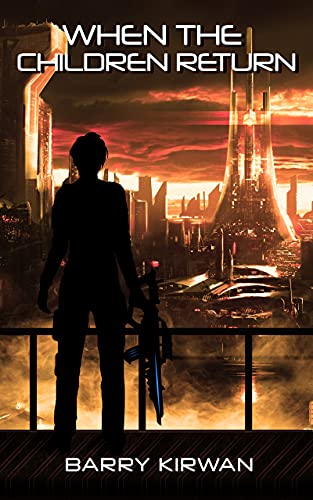 5.0 stars – 4 reviews
Kindle Price: 99 cents
Everyday Price:
Supports Us with Commissions Earned
Enjoy Barry Kirwan Books? Tell us why and WIN a chance for a FREE ebook!
Here’s the set-up:
Ten years ago, Sally had her world ripped away from her – now she’s taking it back.

A decade ago, ten-year-old Sally watched helplessly as the brutal Axleth invaded Earth. She and a few hundred others escaped aboard the spaceship Athena, piloted by the secretive Artificial Intelligence who calls himself Ares. Now, as they approach Earth, she leads her fearless band of refugees determined to take back their home at any cost.

But much has changed on Earth. Finding allies willing to rise up against the Axleth stranglehold will be difficult. And as they near the Solar System, the Athena is tracked and attacked by an enemy ship. Something has followed them from the depths of space.

As war erupts on Earth, Sally’s small army must show more courage than they knew they possessed, and Sally herself must come to terms with what it truly means to be a battle commander, and decide exactly how much she is willing to sacrifice to win back her planet.

Editorial Reviews:
★★★★★ “When the Children Return is the thrilling sequel that takes the series in epic new directions…” Tom Witcomb

★★★★★ “I really liked the deeper themes at play – the idea of AIs and where their power might take them; what is worth fighting for; the idea of augmetics and whether they should be pursued, if maxims should be followed i.e. whether you should make a friend of your enemy, and what that might cost you in terms of conscience. I was never less than entertained! And the emotional heft – my word, this is good! I felt SO many emotions…” Amanda Rutter

★★★★★ “Kirwan’s richly-described settings incorporate aspects of astronomy, engineering, biology, quantum physics — you name it. But it’s the author’s insight into plain old human nature that brings reality to his writing. It was easy to identify with his characters, even though like most of us, I’ve yet to travel beyond our small blue planet.” MEG