Apply your sunscreen and settle in for this steamy small-town romance boxset. . . Morgan’s Bay Series Bundle: Books 1-2 by Theresa Paolo 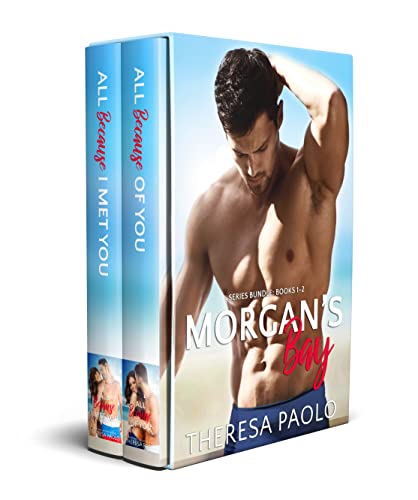 5.0 stars – 1 reviews
Kindle Price: 99 cents
Supports Us with Commissions Earned
Text-to-Speech and Lending: Enabled
Enjoy Theresa Paolo Books? Tell us why and WIN a chance for a FREE ebook!
Here’s the set-up:
All Because of You
Sometimes you have to lose everything to find your happy ending.

Olivia Green had the picture-perfect life. Dating one of the most successful businessmen in New York City, living in a penthouse over Manhattan and a budding career, until one dreadful night when it was all ripped out from under her. If only she’d gone home like she was supposed to, she wouldn’t have known her future fiancé was a two-timing jerk. Now with no choice she is leaving the city to move back in with her parents in the small town of Morgan’s Bay.

Shane McConnell believed he had no family other than his mother, but on her death bed, she revealed the father who died before he was born, came from a large wealthy family. With nothing to lose he sets out to the east end of Long Island to spend a summer with his newly discovered family. What he doesn’t expect is the secrets and lies dating back to long before his father’s death. Nor could he predict the beautiful hot mess he met on the train would find a way into his closed off heart.

Both struggling with the realities of their new lives they unintentionally lean on each other. As their attraction builds and their undeniable chemistry explodes into passion, Shane holds onto his own secret that threatens his chance at love.

All Because I Met You
Best friends: Check. Roommates: Check. Lovers? Maybe

Harper Flynn is tired. Tired of taking care of her alcoholic mom. Tired of online dating and the disastrous dates. Mostly, she’s tired of her recent dry spell. After a night of taking care of herself, her best friend and roommate not only makes her aware he heard her, but also offers to help her out. Never looking at Milo as more than a friend, his suggestion opens her eyes to the possibilities, and she goes for it. Except…he had been kidding.

Milo Amato has had his heart broken one too many times and now refuses to do no strings attached relationships. Ever. When he suggests it to his best friend, he never dreamed she would take it seriously. He was joking around with her. Or was he? Now that she’s kissed him, and feelings he thought he squashed in high school resurface, he battles between what his heart and body want and what they need.

With each scorching kiss and tender touch, deep-rooted feelings unravel, making their friends with benefits agreement complicated, and threatens their long-term friendship that has kept them both from falling apart.
***