From Normandy to Iwo Jima. True tales of combat…on land, sea, and air. The Combat Diaries: True Stories from the Frontlines of World War II by Mike Guardia

The Combat Diaries: True Stories from the Frontlines of World War II 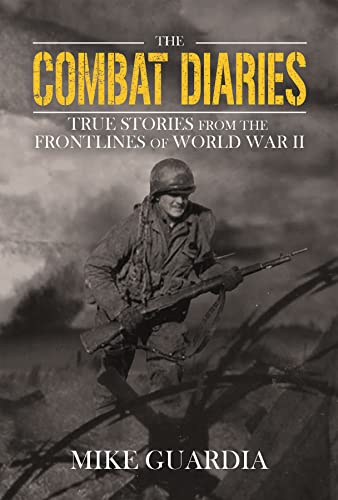 From Normandy to Iwo Jima. True tales of combat…on land, sea, and air.

At the height of World War II, the US military drew some 16 million men into its ranks. They came from every walk of life – farmers, teachers, lawyers, and even Hollywood celebrities. But whether they came from the wheat fields of Kansas, the streets of New York, or the backlots of Tinseltown, these everyday heroes answered the call when their country needed them. They were ordinary men who accomplished extraordinary things. Today, we call them the “Greatest Generation. ”

The Combat Diaries recounts the harrowing tales of more than a dozen WWII veterans – including:

-A young crewman aboard PT-306, who ferried Allied spies and British Commandos onto mainland Europe.

-A young USAAF pilot who was among the few Americans to fly a British Spitfire into combat.

-A Navy combat diver (“frogman”) who swam at night amongst the Japanese-held islands, diffusing underwater mines and setting demolitions to assist the Marines’ amphibious assaults.

Members of the Greatest Generation are leaving us at the rate of several hundred per day. Indeed, the youngest World War II veterans are now in their nineties. The Combat Diaries is a testament to their enduring legacy.