Start saving money today with our FREE daily newsletter packed with the best FREE and bargain Kindle book deals. We will never share your email address!
Sign Up Now!
By Stephen Windwalker
Editor of Kindle Nation Daily
©Kindle Nation Daily 2010
Scroll down to begin reading the free excerpt of The Baby Thief

If you are the kind of reader I suspect you are, I have plans for you. It doesn’t matter whether it’s tonight, this weekend, or even over the holidays, although, let’s get real, I don’t think you want to wait that long.

Why? Because tonight we’ve got two novels that fit that description precisely, by two smart, progressive authors.

The readers of Kindle Nation have already anointed L.J. Sellers as one of our favorite indie novelists for her bestselling novel The Sex Club and the other novels in her Detective Wade Jackson series. The last time she was featured on Kindle Nation our readers vaulted The Sex Club into the top 200 bestsellers in the Kindle Store, and she’s still there nearly six weeks later!

Now she’s back with a generous 7,500-word excerpt from another stand-alone novel, The Baby Thief. I can only warn you about what happens to me each time I begin reading an L.J. Sellers novel. I keep reading. And I don’t put it down until I am done.

But before we get to that inviting excerpt, which really does speak for itself, there’s another absolutely dazzling author who is sponsoring this Free Kindle Nation Short with her novel Set the Night on Fire.

For any of us who have lived through the changes and the social forces that have rocked America since the Sixties, Libby Fischer Hellmann is bound to feel like a kindred spirit, but as her characters and their lives unfold in one stunning bull’s-eye after another, we also realize very quickly that we are in the presence of a master of narrative and characterization.

I feel as if I have been handselling this novel to every single adult with whom I have had a conversation since sometime before Thanksgiving, so there’s a chance you’ve heard some of this from me already, if we were at the same dinner last Thursday evening, or in the same bar over the weekend. But my story has not changed. This is a book you are going to want to read.

Part thriller, part historical novel, and part love story, Set the Night on Fire paints an unforgettable portrait of Chicago during a turbulent time: the riots at the Democratic Convention . . . the struggle for power between the Black Panthers and SDS . . . and a group of young idealists who tried to change the world. 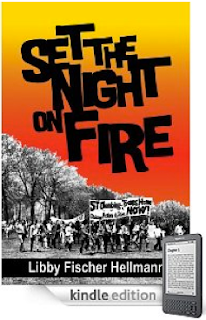 “a tremendous book – sweeping but intimate, elegiac but urgent, subtle but intense.  This story really does set the night on fire.” Sometimes these bestselling authors’ blurbs are dashed off without much thought, but when I picked up Set the Night on Fire

myself and read it through from start to finish it was clear to me that Child had done his homework. Libby Fischer Hellmann is an author of great and diverse talents, and this book is a triumph that, unless I miss my guess, will be read with great pleasure and gifted many, many times over during the coming holiday season. I know this: everyone on my holiday living list who owns a Kindle will be getting a copy, and I can’t imagine another gift for under $5 that would be more appreciated by any reader. –S.W.)

Text-to-Speech: Enabled
Someone is trying to kill Lila Hilliard. During the Christmas holidays she returns from running errands to find her family home in flames, her father and brother trapped inside. Later, she is attacked by a mysterious man on a motorcycle. . . and the threats don’t end there.
As Lila desperately tries to piece together who is after her and why, she uncovers information about her father’s past in Chicago during the volatile days of the late 1960s . . . information he never shared with her, but now threatens to destroy her.
“A brilliantly-paced thriller, transitioning seamlessly from modern-day Chicago to the late ’60s. First-rate characterization…Best to start early in the day, as it is easy to stay up all night reading it.” –Foreword Magazine
“RT Top Pick for December: “Electric… a marvelous novel.”
–RT Book Reviews
Visit Amazon’s Libby Fischer Hellmann Page
Find all the books, read about the author, and more.
Click here

(or a free sample) to your Kindle, iPad, iPhone, iPod Touch, BlackBerry, Android-compatible, PC or Mac and start reading within 60 seconds!
Scroll down to begin reading the free excerpt of The Baby Thief

Read a free sample of our eBook of the Day, William Campbell’s Awakening: Dead Forever Book 1

, without leaving your browser!

Imagine a world where death is merely an inconvenience. A new body awaits and we resume living, fully aware of the past. Every love, talent and distaste, retained from one life to the next. But this immortal paradise has a price — eternal life as slaves, oppressed by masters who forbid individuality, creative expression, and free thinking.

A band of rebels refuses to conform, but for a population that reincarnates, the government is powerless to eliminate insurgents. Putting them to death is useless. The rebels will return, again and again. The final solution — perpetual amnesia. Kill their memory of past lives, and banish the rebels to a lonely corner of the galaxy.

Robbed of his identity and purpose, a reluctant hero is dumped into a transient existence, and he regards himself as insignificant. But he is of great interest to agents in black who come to collect him. His decision to flee begins a journey of rediscovery, but some of it he would rather leave buried. When an oddball crew of fellow rebels comes to his rescue, the boundaries of reality are tested, and who to trust is anyone’s guess.

Eager to arouse his memory, a flirtatious member of the rebel team shows him the life he once enjoyed, and more, as he returns to a strange world where bodies are manufactured and childhood is obsolete. If only he could be a child again. First he’ll have to remember how to reincarnate.

“Awakening is a professionally written and solidly edited book that I feel is well worth the price and time you’ll spend on it. Cool science concepts made believable and an interesting story line by an author who’s unafraid to have some fun while he’s writing.”
— Clayton Bye, The Deepening World of Fiction
“In the action adventure, the pace is non-stop race from being back in the hands of authority and always questioning the position and actions of the rebel group. The characters are a little odd, but extremely realistic and likable. The personal voice is the strength of the novel in that you feel as if you really live in the main hero’s body with him.”
— Teri Davis, Reviews by Teri blogspot
“Each character has a unique personality and Campbell does a great job of bringing them to life.”
— Charline Ratcliff, Rebecca’s Reads
“Dead Forever Awakening is a fascinating science fiction adventure, highly recommended.”
— Midwest Book Review
And here, right in the comfort of your own browser, is your free sample!

Hoping that yesterday’s publisher-pricing shenanigans are disappearing in the rear-view mirror, we start off the new month with an intriguing international array of a dozen new additions to add to the latest listings to our 150+ Free Book Alert listings….

But first, a word from … Today’s Sponsor
A few days ago I mentioned that another book might have been one of the highest-rated books yet to appear as a Kindle Nation Daily Sponsor. Well, here’s a great new novel from L.C. Evans to give them all a run for their money with 13 out of 14 five-star reviews! 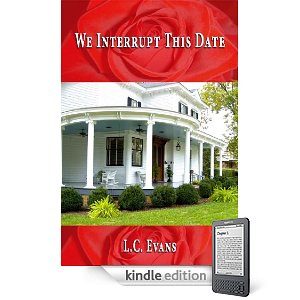 Now that she has recovered from her divorce, will Susan be able to deal with the gaggle of relatives who threaten to get in the way of her new life? Discover how she does it in
We Interrupt This Date

More than a dozen reviewers are wild about We Interrupt This Date:
Here’s the set-up:

Since her divorce a year ago, Susan Caraway has gone through the motions of life, feeling at best mildly depressed. Now she is finally coming out of her shell. Just when she decides on a makeover and a new career, her family members call on her for crisis assistance.

First there’s her sister DeLorean who has come back from California with a baby, a designer dog, and no prospects for child support or a job. As soon as DeLorean settles in at Susan’s home, Susan’s son Christian comes home from college trailing what Susan’s mama refers to as “an androgynous little tart.”
Then there’s Mama herself, a southern lady who wrote the book on bossy. A secret from Mama’s past threatens to unravel her own peace. But not before Mama hurts her ankle and has to move into Susan’s home with her babies—two Chihuahuas with attitude.
Susan would like to start her new job as a ghost tour operator. She would like to renew her relationship with Jack Maxwell, a man from her past. But Jack isn’t going to stand in line behind her needy family.
Visit Amazon’s L.C. Evans Author’s Page

We Interrupt This Date

Each day’s list is sponsored by one paid title. We encourage you to support our sponsors and thank you for considering them.
Authors, Publishers, Kindle Accessory Manufacturers:
Interested in learning more about sponsorship? Just click on this link for more information.
Free Contemporary Titles in the Kindle Store

HOW TO USE OUR NEW FREE BOOK TOOL:
Just use the slider at right of your screen below to scroll through a complete, updated list of free contemporary Kindle titles, and click on an icon like this one (at right) to read a free sample right here in your browser! Titles are sorted in reverse chronological order so you can easily see new freebies!

Read a free sample of our eBook of the Day, Y.S. Pascal’s Renegade Paladins

, without leaving your browser!

Haunted by the mysterious disappearance of her beloved older brother, Shiloh hopes to track him down by following in his footsteps as a secret agent for the Zygan Federation, an intergalactic empire still hidden from Earth.
During this quest, Shiloh and her British co-star Spud, also a Zygan agent, fly into space–for real–to stop terrorists and invaders who could destroy the Federation and kill millions throughout the universe. Sent back in time to Earth’s Ancient Middle East to save the life of a young prophet and prevent Earth’s destruction,
Shiloh and Spud stumble on a diabolical conspiracy and barely escape with their lives. Their assignment sabotaged, Shiloh and Spud discover the villains’ real mission, face powerful enemy fighters from warrior planets and traitors from their own ranks, and race against time to save Earth.
And here, right in the comfort of your own browser, is your free sample!