Just click on the picture of the Kindle in the carousel above and, when you are delivered to Amazon, hit the “Add to the Shopping Cart” button at the right of your screen. Then, at checkout, enter the promotional code OPRAHWINFREY in the appropriate field on the right of your screen and click “Apply.” $50 will automatically be removed from your purchase price, for this limited time only.

The question made me realize that some of the Kindle features that have become second nature for me after nearly a year of engagement may still seem counter-intuitive to many or even most Kindle users. After all, for decades we have grown used to using the index or the Table of Contents of a book to find specific items in the text. With the Kindle, those methods are the least efficient.

The reason is that the Kindle’s search feature is a far more efficient way avenue for searching out nearly anything that one is looking for on one’s Kindle. Here’s the relevant text of my email back to Phil:

If you find a phrase in any hardcopy edition and you want to locate it in an electronic version that you have stored on your Kindle, you can use the Kindle’s search feature to look it up. Just follow these steps:

1. Turn off your Kindle’s wireless switch if it is on, so that the search won’t bog down in searching Wikipedia or the web.

2. Click “SEARCH” on the bottom row of the Kindle keyboard.

3. Type in the phrase you are looking for and use the scroll wheel to click “Go.” Tip: It is important to use a specific enough phrase so that you get a short list, just as you would with a Google search. When I typed in “some intriguing,” my Kindle came up with 5 selections from documents I had onboard: 4 from the New York Times and 1 from my book.

4. Select the correct citation from the list that appears (it usually takes about 30 seconds, but of course this depends on specificity), and you will be delivered to the text you are looking for in the document.

5. If the text is a hyperlink that you want to pursue, be sure to turn on your Kindle’s wireless switch before you use the scroll wheel to click on the link.

That worked for me — let me know if it works for you.

Naturally, this process is useful whether it applies to a phrase that you found in a hardcopy, a phrase that you might remember from an earlier reading, or any other phrase. And if you turn on the wireless switch before you search, the search may take a little longer but you would also find iterations on the web and in Wikipedia.

Boston, MA, October 13, 2008 — The first book-length critical assessment of Republican vice-presidential nominee Sarah Palin — Thanks But No Thanks: The Voter’s Guide to Sarah Palin by Sue Katz — has soared into position as the top political campaign book in Amazon’s Kindle store, where it will soon be joined by four “Kindle Exclusives” from Newsweek on the four major national-ticket nominees.

Unlike the Newsweek publications, Thanks But No Thanks is also now shipping in a paperback edition and is available through most bookstores nationally as well as Amazon.com.

“It was especially cool to have Thanks But No Thanks come out on this new Kindle technology, even before the paperbacks were ready to be shipped,” Katz said. “Kindle has allowed tech savvy readers to be the first to get into my brain and my book, but we also want to reach readers who get their information from the printed page.”

Katz began blogging about Palin and her selection as vice-presidential nominee just hours after John McCain announced his choice in late August. Within a few days, a book deal with independent publisher Harvard Perspectives Press had landed in her lap.

Now, the newest book on the 2008 presidential campaign – and the first to take a critical look at Sarah Palin – has caught fire following its launch Wednesday on the eve of last night’s vice-presidential debate.

Launched as a Kindle exclusive prior to its paperback edition launch on October 10, Thanks But No Thanks is the product of a month of intensive work by Katz and was published by independent publisher Harvard Perspectives Press. The book has already received rave reviews from several major authors, including Harriet Lerner, author of bestseller The Dance of Anger: “Sue Katz’s meticulously researched book cuts through the media fog and political doublespeak, bringing the facts about Sarah Palin into sharp resolve.”

“The response to my blog entries immediately after Palin’s selection made me realize that people were hungry for help in distilling all the information that started pouring in,” said Katz this week. “Now that my publisher has announced the book, I’m astonished to see how the mesh of networks kicks into gear when it finds something of interest. The circles I’ve been involved in all my life have been telling all their various networks and the resulting buzz over just 48 hours is stunning.”

The Newsweek publication on Sarah Palin will collect the magazine’s coverage of Palin since her selection August 29 and will be available for Kindle readers on October 15.

Thanks But No Thanks: The Voter’s Guide to Sarah Palin by Sue Katz, is now the #1 bestseller in the Amazon Kindle store, just days after its launch.

Signed copies of the paperback edition of Thanks But No Thanks: The Voter’s Guide to Sarah Palin are being offered at a 20% discount on Amazon, and the book is also available in other electronic reading formats including the iPhone and the Blackberry through Mobipocket. Just days after its launch the new Palin book is one of the topselling current affairs titles at Amazon, and will be available in better bookstores nationally next week.

Already emerging as one of the important political books of the general election season, Sue Katz’ book has received praise from several distinguished authors, including bestsellers Harriet Lerner and Susie Bright:

‘Sue Katz’s meticulously researched book cuts through the media fog and political doublespeak, bringing the facts about Sarah Palin into sharp resolve.’ –Harriet Lerner, author of The Dance of Anger

‘Sue Katz is just the she-bear to wrestle Sarah Palin’s image back down to earth. Forget the myth about the GOP’s latest superstar–Katz will show the real motivations behind Palin and where she comes from.’ –Susie Bright 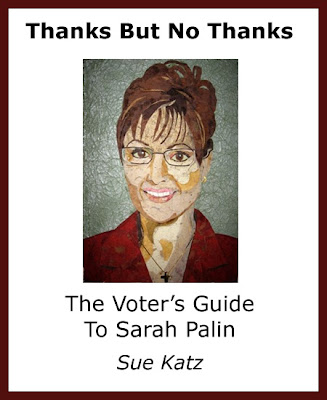 Who is Sarah Palin and what does she believe in? People around the country — and indeed the world — had more questions than answers when John McCain announced her selection as his running mate on August 29, 2008. Has any national political candidate ever emerged on the American political scene with less scrutiny than Alaska Governor Sarah Palin received prior to her selection?

Whether you believe Palin was nominated because of years of hard work in Alaska, as a result of a reckless decision by her “maverick” running mate, or because of the influence of the religious right, you probably want to know more about this remarkable political phenom.

Hours after John McCain shocked the nation by selecting Palin as his surprise Republican running mate, journalists, activists, and ordinary concerned citizens began to research and write about Palin’s biography, public statements, and political background. The flood of information and commentary has been torrential.

For those who would like some help sorting through all the hype about Sarah Palin, Sue Katz’s Thanks But No Thanks: The Voter’s Guide to Sarah Palin is the perfect solution. Katz distills the overwhelming glut of information about Palin into a highly readable and fast-paced voter’s guide about the woman who may be elected vice-president in 2008 and who could well serve as president one day. From Palin’s days in Wasilla to her leap into Republican super-stardom, Katz helps you to better understand this intriguing candidate.

While remaining true to her own strong point of view, Sue Katz looks beyond the lipstick and the sound bites. Thanks But No Thanks synthesizes information and commentary from a wide range of sources so that readers of any political persuasion will find help in educating themselves about just who Sarah Palin is and what her election might mean for the country and the world.

This book is for voters who want to go beyond the usual campaign “puff piece” biographies and learn about Palin’s known views on everything from community organizers to women’s issues to the relationship of faith and politics. Thanks But No Thanks provides the reader with access to interesting voices from around America and the world, and they all have something insightful to say about Sarah Palin.

In addition, the publisher has included several valuable appendices that will serve as handy references for voters and debate-watchers: a year-by-year chronology of key events in Palin’s life, a detailed history of Palin’s performance in past elections, and the full text of her acceptance speech at the Republican National Convention.

Author and teacher Sue Katz has published journalism and political commentary for many years and is the creator of the popular blog, Sue Katz: Consenting Adult. Her passport shows more wear than Palin’s–she has lived and worked on three continents, teaching martial arts in her institutes in Israel, promoting global volunteerism while living in Europe, and writing, editing and teaching (from salsa to senior fitness) in the United States. A rebel with a newfound interest in electoral politics, Sue continues her lifelong commitment to social justice activism from her home outside Boston. She attended Boston University as an undergraduate and earned her master’s degree from Tel Aviv University. Her second book, an edgy and unabashed look at the private behavior of boomers, is due in 2009.

The unique collage portrait of Sarah Palin was created expressly for the Thanks But No Thanks cover by artist Sandy Oppenheimer. Her well-deserved international reputation reflects this distinctive style, and her creations are as affordable as they are exceptional. Contact Sandy at sandyoppenheimer@hotmail.com or view her work at http://sandyoppenheimerportraits.blogspot.com.