There are a million posts (and podcasts) in the Kindlesphere, and here are a few that caught my eye this week and seemed worth sharing with you:

blog, where Andrys has

Defective by Design, an anti-digital rights management (DRM) initiative founded by the Free Software Foundation in 2006, has launched a petition drive aimed at persuading Amazon to remove digital rights restrictions from the books that Kindle owners purchase and download from the Kindle Store. The DRM issue has been a contentious one since the Kindle was launched in November 2007, and took on an uglier dimension when Amazon surreptitiously and wirelessly removed two George Orwell novels from its customers’ Kindles earlier this year. Amazon founder and CEO Jeff Bezos later issued a very strong apology for the way Amazon handled the Orwellian book removal.

We believe in the freedom to read

That is why we readers, authors, publishers, and librarians demand that Amazon remove all DRM, including any ability to control or access the user’s library, from the Kindle.

Amazon’s assurances that it will refrain from the worst abuses of this power do not address the problem. Amazon should not have this power in the first place. Until they give it up they will be tempted to use it, or they could be forced to by governments or narrow private interests. Whatever Amazon’s reasons for imposing this control may be, they are not as important as the public’s freedom to use books without interference or supervision.

You can add your online signature to this petition here, if you wish.

Here is a list of Kindle books that have been tagged as DRM-free by their authors and publishers, and here is another with DRM-free tags placed by readers.

As an author, a publisher, Kindle owner, and reader, I have been a supporter of these campaigns. But it is worth stating again here my belief that ultimately Amazon will change its tune on Kindle DRM both because of campaigns such as the petition and DRM-Free tagging and because it will be a good business decision, just as it has been a good business decision for Apple, after years of consolidating its position, to remove many of the DRM constraints it has placed on iTunes tracks:

Just as a time came when Apple was able to locate its corporate self-interest in allowing customers to remove DRM from their iTunes store audio purchases for a price, a similar time will probably come for Amazon with respect to customers’ Kindle Store purchases. In both cases, the timing seems to require that some critical mass of the applicable publishers reach a certain nuanced understanding of and experience with the changing revenue streams and marketing channels that digital publishing and distribution allow. It’s not exactly dialectical materialism, but it is a world in which changes in politics must be driven by, rather than be the drivers of, changes in economic relationships.

We can’t all be Lawrence Lessig or Cory Doctorow, and neither Amazon nor Apple will ever be Google, Creative Commons, or Project Gutenberg. Most publishers possess little understanding of Lessig or Doctorow or anyone else who has discovered the viral (and, often, easily monetized) marketing power of setting one’s words free in selected venues, and many probably label them as the “free books crowd” and shut down reflexively in the face of any opportunity to listen to them or learn from them. Call me Pollyanna, but I believe that Jeff Bezos does possess some nuanced understanding of these issues, and in time, armed with the larger and larger payments his company’s Kindle division is making to publishers, will be in a better position to bring them along into a future where there is a wide acceptance of DRM-free electronic publishing standards. But on the Darwinian path to that future, it would be very uncharacteristic of Amazon not to continue to consolidate and strengthen its position.

We all know that a picture is worth 1,000 words, even in this economy. But are charts like these worth 28 million Kindles?

Thanks to David Rothman’s heads up at TeleRead, they come tied to a juicy tidbit of Kindle projection from a pretty credible source:

The well-respected and extremely popular Tech-On blog (Tech and Industry Analysis from Asia, based in Japan, with a current Alexa traffic rank of 1,007) has a cover story today projecting a worldwide installed base of 28.6 million Kindles and other ebook readers within four years:

A number of promising proposals are popping up in the eBook market, almost as if it remains unaffected by the worldwide economic downturn that began in the second half of 2008. For example, the quantity of eBook readers shipped by companies like Amazon.com and Sony has soared from the end of 2008 through 2009. And right in parallel with that growth has been significant growth in the scale of the eBook content market, also from the second half of 2008.

Growth forecasts for the eBook market are rosy, too. According to a recent report from survey company In-Stat of the US, total global shipments of dedicated eBook readers will hit 28.6 million units in 2013 (Fig 1b). Considering that 2008 shipments were only about one million units, this represents a 30-fold increase in only five years.

And here I will add a few juicy projections of my own:

3. The Brass Bed by Jennifer Stevenson

8. My Soul to Lose by Rachel Vincent 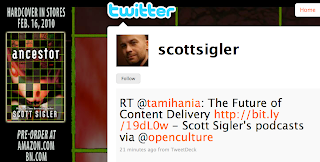 Like Joe Konrath and Cory Doctorow, Scott Sigler is a talented, bestselling novelist who isn’t afraid of doing some hard thinking about what the Kindle and other new publishing technologies will do for us as readers and writers and, oh, yes, people otherwise employed in the book trades. He releases many of his books in the form of podcasts, often free, and once you get past the introductory stuff he had some very interesting things to say in this speech (which is not G-rated) on the future of content delivery:
Click & Listen: FUTURE OF CONTENT DELIVERY mp3
And yes, you can download this and listen to it on your Kindle by following the instructions in Chapter 10, “Unlock the World of Free Audio on the Kindle,” of FREE: How to Get Millions of Free Books, Songs, Podcasts, Periodicals & Free eMail, Facebook, Twitter and Wireless Web With Your Amazon Kindle, Kindle 2, Kindle DX, or Kindle for iPhone App.

Three classics top the billing as the most popular among over 7,000 free “public domain” books in the Kindle Store, as of Monday, August 17, 2009: The Adventures of Sherlock Holmes, Pride and Prejudice, and The Art of War. If you have any doubt about the value, for Kindle owners, of the value of “Free,” let me just observe that all of these three books are currently among the top 15 titles overall in the Kindle Store, which means that they are “selling” over 200 copies a day each!

Is this a mountain, or a molehill? Or should we just call it “1985” and hunker down for two weeks of blowback and a lawsuit or two?

At some point in the last few days, Amazon began including this line in the “product detail” information display for all its Kindle newspapers and magazines: “Your name, billing address and order information will be shared with the publisher.” I got a heads up early this morning from Andrys Basten at the Kindle World blog, and felt it could be important enough to share with Kindle Nation immediately. Here’s a screenshot of the information as it appears on the New York Times page this morning:

There are online forum discussions already in which some participants are saying that this will make the recent Orwell ebook removal issue look miniscule by comparison, while others are calling this a non-issue.

For my part, it does not surprise me that Amazon decided that it had to begin providing certain information to publishers, or that it had to begin informing customers if it was already passing along that information. My years at Inc. magazine a decade ago confirmed me that subscriber address lists are pure gold to magazine and newspaper subscribers, not least because they are frequently monetized as a significant ancillary revenue stream by being sold and resold to list vendors in ways that would be alarming to any subscribers concerned about privacy and identity issues.

But this could have been handled in a much smoother way, a way that would be far more sensitive to customer concerns. Why not send an email to customers allowing several security options for providing the information, even if one of the options involved cancelling the subscription rather than providing any information? It would have required a lot less time and attention to detail than Amazon will probably end up devoting to cleaning up the mess of another public relations mini-disaster.

There have been times in the past when I may have become a little exercised with frustration over a sense that some of Amazon’s Kindle staff appear a bit high-handed and officious, particularly in dealing with the authors, publishers, and creative talent who provide so much of the Kindle’s reason for existence. But each time I learn of one of these screw-ups, it just makes me stop and wonder when Amazon is going to figure out that the Kindle and its relationship with Kindle downloaders and uploaders is the leading edge of its brand image, and should be treated accordingly.

In other words, every single strategic and tactical decision about the Kindle that might lead to a discussion anywhere in the Kindlesphere deserves and needs to be vetted and discussed in Jeff Bezos’ office, before it is executed. Like this one will be, even if only after the fact.