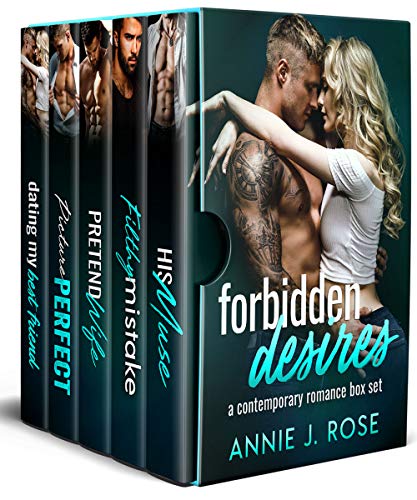 Five full standalone novels full of steamy forbidden romances sure to heat up the coldest winter nights.
Settle in with these sexy bad boys and the ladies who’ve been forbidden to love them.

Book One: His Muse

I fell in love with my brother’s best friend.
Only to get pregnant, and then abandoned.
He left me when I needed him the most.
I’ve survived five years without him.
But my heart still races when I see him again.

Book Two: Filthy Mistake
Every girl desires to climb into his bed.
I’ve done that already.
Now I want more.
More than his lust and his money.
I want his heart.
Because he has mine.

Book Three: Pretend Wife
I said yes to being a fake wife to the hottest Hollywood actor alive.
Was it a stupid move?
Probably.
But I have to tell him how I feel.
Especially now that he’s fighting for his life.

Book Four: Picture Perfect
I’d never been rejected by a woman.
Much less the only woman I obsess over.
I know I’m playing with fire.
Eventually it’s time for me to leave town again.

But this time I’m not leaving without her.
…And her little secret that won’t stay little for long.

Book Five: Dating My Best Friend
She’s still hurt that I broke my promise.
There’s no room in her life for me now.
But this attraction won’t be ignored.
Her lush mouth, her touch, they bring light to my dark corners
But my secrets, my past, threaten to scare her off.
I don’t know if she can handle what I’ve become.

Forbidden Desires is a collection of five steamy standalone romance novels. No cliffhanger, no cheating, plenty of steam, and a guaranteed HEA.