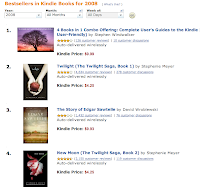 For those who like to keep their finger on the pulse of Kindle book sales, Amazon has just announced the launch of several bestseller archives including a comprehensive archive of Kindle Store bestsellers on a year-by-year, month-by-month, and week-by-week basis going back to the very first day of the Kindle era, November 19, 2007. Here are links to the three full-year bestseller lists, where you will also find pull-down menus that make it easy to focus on any week or month during the 25 months since we have had Kindle books to download.

I found it to be great fun to peruse these lists, and as is usually the case when I check out end-of-the-year lists for just about any year, I found a few titles that I really wanted to read, but somehow missed the first time around.


No doubt there will be far more interesting analyses of these archives by others, but there are a few things that jump right out at me about the 2009 Kindle Store bestseller list:


Instead, here’s how it works: