We are well into week #12 of our wild and crazy plan to give away a brand new Kindle Fire every week through the rest of this year and as much as we can of next, and we are convinced that one of these Kindle Fires may have your name on it!

Maybe yours will be awarded Monday, but you know how this works, right? You can’t win it if you don’t enter.

We’re especially grateful this final week of 2012 to the person who is making our Week #12 Kindle Fire giveaway sweepstakes possible as its sponsor, Danielle Younge-Ullman, author of FALLING UNDER.

(And just in case you are wondering, Danielle has already paid the full cost of the new Kindle Fire that could very well have your name on it. Every penny. What’s that? If you have a good understanding of how karma works in these matters and you want us to repeat that link so you can make sure you have downloaded a copy of FALLING UNDER before our Week #12 drawing, thanks. But let’s be clear that while the cosmos works by its own rules, we of course have no way of knowing what you download from the Kindle Store.)

The Week #12 Sweepstakes runs until 7 pm Eastern on Sunday January 1, and entry details can be found at the end of this post.

But first … a word from this week’s sponsor. 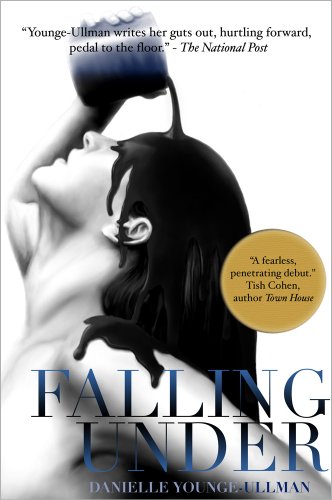 FALLING UNDER
by Danielle Younge-Ullman
4.8 stars – 22 Reviews
Kindle Price: $2.99
Text-to-Speech and Lending: Enabled
Don’t have a Kindle? Get yours here.
Here’s the set-up:
“Fierce, erotic and absolutely fearless, this riveting debut tunnels into the psyche of a young artist who is as self-destructive as she is talented. To transform her career and have any sort of shot at happiness, she must grapple with thorny secrets from her past and open herself up to the terror of love. Shocking and moving, FALLING UNDER is as edgy as a razor blade and unlike anything you’ve ever read before.” – NYT Bestselling author Caroline Leavitt, reviewing for Dame Magazine

“FALLING UNDER is one of the most compelling debut novels I’ve read in a long time. It is gutsy, emotional, sexually charged and, because of its second-person narrative style, unremittingly intense. Younge-Ullman writes her guts out, hurtling forward, pedal to the floor. The result is a gripping story, crackling with energy.” – The National Post

“Here’s a debut novel that delivers…The story of Mara, a talented painter so beset by her demons and fears that can she can barely leave her house, is set alongside the story of Mara’s childhood, and I got the rare experience of both plunging forward with the story and stepping back to applaud the technical skill and bravery of the execution. Extreme, and extremely well done!” – Kim Alexander for XM Radio Fiction Nation

“Younge-Ullman has a talent for turning the shadows of life into a thing of beauty, almost poetry.” – Curled Up With A Good Book

“…hard-hitting and explosive, with a raw energy that left me breathless.”- Goodhousekeeping.com

Gutsy and provocative, Falling Under is the story of a reclusive young artist whose past begins to catch up with her when she falls in love.After growing up as the only child of bitterly divorced parents, Mara Foster has finally gained independence and is embarking on a promising career as an artist. But despite her success, she is fragile. Burdened by a host of fears and anxieties, she finds it difficult even to leave the house on most days. When Mara meets Hugo, the walls she has built around herself begin to crumble, and as she struggles to find a breakthrough both in her art and in life, she must come to terms with her own dark secrets in order to get a second chance at happiness.
Written in spare, crisp prose and marked by wry humor, Falling Under is a gripping contemporary tale of human weakness, friendship, and hard-earned redemption.

Here are the details on the Kindle Nation Week #12 KINDLE FIRE Giveaway Sweepstakes: