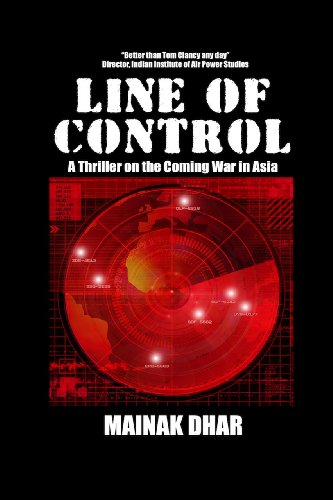 Line of Control – A Thriller on the Coming War in Asia
by Mainak Dhar
4.5 stars – 15 Reviews
Kindle Price: 99 cents
Text-to-Speech and Lending: Enabled
Don’t have a Kindle? Get yours here.
Here’s the set-up:

It is 2012, and the world is a more dangerous place than ever before. Revolutions have swept aside one Middle Eastern regime after another. A regime allied to Al Qaeda has swept to power in Saudi Arabia, and uses its oil wealth and modern arsenal to further spread Jihad around the world. Yet another military coup brings a fundamentalist regime to power in Pakistan, which initiates an audacious plan to strike the first blow in this new global Jihad. As unprecedented terror attacks stun India, the stage is set for a conflict that brings the Indian subcontinent to the brink of a nuclear apocalypse.

With a broad cast of characters that puts the reader into the thick of the unfolding crisis, a fast-paced storyline ripped from today’s headlines, and explosive action, Line of Control is a thriller uniquely suited to the times we live in.

Praise for the Indian paperback edition:

“An outstanding book. Better than Tom Clancy any day. I wish I had/could have written such a book.” – Air Commodore Jasjeet Singh (Retd.) Director, Institute for Air Power Studies

“Dhar brings us a scenario that seems possible yet apocalyptic.”
– The Hindustan Times

“Other than being a great plot, the author seems know how weapons work, which is a great relief to the readers and spices up the novel.” – Frontier India

“The characters seem real, with abundant mention of various historical characters and national heroes. Dhar has done equal justice to characters from both sides of the border. By placing readers in the thick of action, similar to the circumstances that we find ourselves in today, Dhar has actually managed to find a connect that cannot be missed easily.” – HT City

“A page-turner right the word ‘go’, Line of… is also very timely. With utter chaos all around and many internal battles fought in the name of religion, Line of … couldn’t have been timed better. This racy war-thriller is exciting, to say the least, as the reader is drawn deep into the action of war. Mainak Dhar’s characterization deserves a special mention too, as each character, be it the Pakistani or Indian, is sketched in detail, complete with their eccentricities and ordinariness.” – Deccan Herald

“The spine-chilling war scenario entertains, by all means, with skilful plot, well-drawn variety of characters, thrilling action, a high degree of intrigue, suspense and tension, grim humour…There is no gainsaying the fact that in the wake of recent Mumbai terror strikes, “the war thriller”, delineating serious and topical concerns — fundamentalism fuelling terrorism, burgeoning instability in Pakistan, reaction of other countries to the chronic and mounting tension between India and Pakistan — will attract much wider readership.” – The Tribune

From Laurie Faria Stolarz–the author of the bestselling “Blue is for Nightmares” series–comes this supernatural romance about a teen girl’s attraction to the hunky, but mysterious new guy in school, whose touch has very unnerving effects.