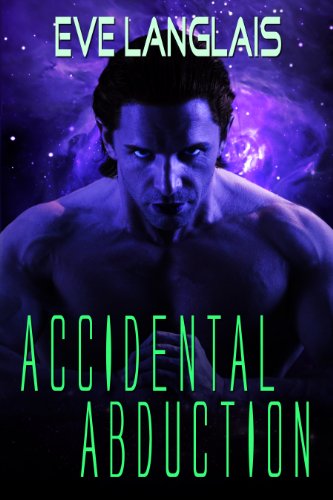 4.2 stars – 47 Reviews
Kindle Price: 99 cents
Text-to-Speech and Lending: Enabled
Don’t have a Kindle? Get yours here.
Here’s the set-up:

Isn’t it time you found out why purple mercenaries are the galaxy’s hottest heroes?

Grab your copy of Accidental Abduction for only 99cents, a hot price available only until April 21st.

He didn’t mean to abduct the human female, but now that he has her, should he kill her or take her as his mate?

A boyfriend’s attempted murder leaves Megan floundering in the ocean. Sinking without hope, the bright light she sees in the night sky isn’t her doorway to heaven, but rather the beginning of her accidental abduction by a space pirate. While thankful of his rescue, Megan stays true to form and just can’t keep her mouth shut, even when he keeps threatening to kill her–or auction her off to the highest bidder. Even odder, despite her decision to not get involved with her wickedly hot captor, she can’t help craving his touch.

Tren retired from his job as a mercenary so he could enjoy life, but he never counted on the boredom of normalcy. The acquisition of rare items has somewhat filled the void, but his accidental abduction of an outspoken earthling, who doesn’t know when to shut up, turns his life upside. Her fiery spirit draws him while at the same time drives him insane. Struggling with his urges, he must decide– throttle her barbarian neck or ravish her delectably lush body?

Despite what his heart tries to tell him, he’s determined to sell her to the highest bidder even as he seduces her body. However, despite his best intentions, he discovers he can’t let her go. And when a foe from his past thinks to steal her, he’ll do anything to get her back.

Alien Abduction Series (each is a stand alone story):

“I absolutely loved the main characters. …As always, Ms. Langlais gives us great characterization, an original take on an alien encounter story and more *lol* verbal banter than you can shake a stick at.” -Dark Diva Reviews