BOOKER – Tap That (A Private Investigator Thriller Series of Crime and Suspense): Volume 2 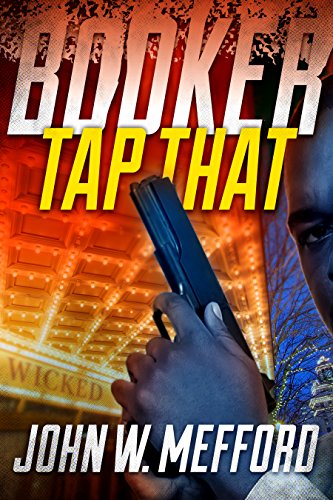 4.8 stars – 86 Reviews
Kindle Price: 99 cents
On Sale! Everyday price:
Text-to-Speech and Lending: Enabled
Don’t have a Kindle? Get yours here.
Here’s the set-up:

A performance for the ages.

Courtney Johnson brings the house down in the heart of the vibrant Dallas Arts District. Later, shrills pierce the hallways of Wyle Theater when Courtney, a budding Broadway musical star, is found dead, a single bullet to the head.

Driven to find the killer before panic tears apart the arts community and all those who support it, private investigator Booker T. Adams discovers evidence of a professional hit, then uncovers a lovers ‘ triangle that takes him all the way to the mean streets of Boston.

And then it happens again. Another performer killed, someone Booker had met. Rocked by the shocking murders, performers and patrons alike fear that a serial killer is on the loose, and no one knows when and or where another dead body will show up.

But professional obligations quickly morph into personal vendettas. Running against an unforgiving clock, Booker is forced to solicit the help of a crime boss, The Shark.

With his life threatened at almost every turn, and his heart being put through a meat grinder, Booker taps into every resource at his disposal to stop more than just a killer.

But at what price?

Full of unforgettable characters, bone-chilling suspense and stunning thrills, BOOKER – Tap That is a wild ride that will test even the most fervent reader’s quest for a luminous reading experience.

“For the thriller/P.I. reader who wants more than a vivid plot, but expects the characters to match up with their action. Tap That does more than match plot with psychological tension: it excels in it, making it one of the top recommendations in the genre.” — D. Donovan, Senior Book Reviewer, Midwest Book Review

“John W. Mefford has again injected the private eye genre with a cast of wild, edgy characters, a wry sense of humor, and far-out action. Throwing Booker — half black, with humble roots — in with the artsy set is a nice bit of genius, and Booker – Tap That – plays that tune with hilarious results.” — Dave Eisenstark, Readers’ Favorite