And thanks again to Kindle Nation’s own Al M. of Bardstown for another Kindle for Mac app challenge:

Steve, I have installed the Kindle for Mac on my MacBook and tried it out. The font size adjustment is really good with huge fonts and the highlights from the book that I downloaded has yellow highlighting where I had underlined on the Kindle version. However I cannot print or select anything, so if I want a recipe for example, I have to highlight it on the Kindle and then print if from My Clippings.

Al, I doubt that we will see any simple, straightforward print-enabling with the Kindle for Mac or Kindle for PC apps any time soon, but if all you are looking to do is to print out a recipe now and then for your strictly personal and non-commercial use, this should work pretty well.

Find a recipe in like the recipe for Sangria at locations 1,245-1,258 of the Kindle edition of my former college classmate Martha Rose Shulman’s Mediterranean Harvest cookbook. Position it appropriately on your Kindle for Mac screen and use the COMMAND+SHIFT+4 command to capture a screen shot of the area that you want to print. Once you initiate the command you’ll see an icon that lets you know you can press down on your mouse in one corner of the capture area and release the mouse when you have moved it (and the shaded area that you are creating) to the diagonally opposite corner. When you release the mouse you’ll hear a cool little sound like the one made, I think I recall, by a camera shutter.

Then just use the Mac’s Preview application to locate and open the screen shot and you’ll see something like this: 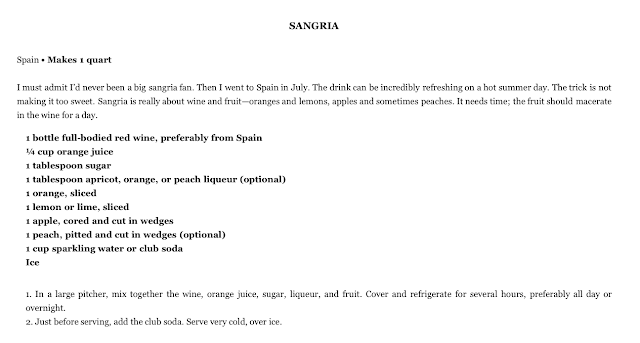 From within Preview, you should then be able to select “Print” from the File pull-down menu, make sure that you’ve chosen Landscape orientation (I always like a nice landscape with my Sangria), and in a moment or two you should have a printed copy of the recipe, for your personal and non-commercial use only, of course.

If we thought the next big Amazon news release would unveil some of the SuperKindle features for which we have been waiting, well, not so much. Here’s the news release that was shared moments ago by Amazon:

“Customers tell us they love to cook from recipes on their Kindles,” said Russ Grandinetti, Vice President, Kindle Content. “Kindle for iPhone or Kindle for BlackBerry is a great way to keep ingredients lists with you when you go to the grocery store, and then pick up right at that recipe on your Kindle when you’re ready to cook. In the kitchen, Kindle doesn’t have pages that may close while you’re trying to reference a recipe. We hope that our customers who cook will take advantage of some of these great Kindle books.”

“With the new edition of ‘How to Cook Everything’ now available on Kindle, more people will be cooking from my book than ever before,” said Mark Bittman. “And that’s been my goal all along: to encourage everyone into the kitchen.”

The Kindle Store has thousands of great books for cooks. Some of the new and most popular books include:

Kindle is in stock and available for immediate shipment today at www.amazon.com/kindle.

Here’s a money-saving tip for new Kindlers who are awaiting for the arrival of their Kindle 2. Amazon, publishers, and authors often get together to offer temporary “zero-price promotions” on popular books in the Kindle Store, in addition to the thousands of free public-domain titles that are now available.

Naturally, these books do not remain free forever, but you do not have to wait for the arrival of your Kindle 2 to place your order. You can order these free books today and they will be delivered wirelessly to your Kindle 2 when you power it up for the first time. Just make sure that you place the order through the Amazon account that will be linked to your Kindle.

Eight of these books are being offered free by Random House through the end of February, and many are by authors who are publishing new work in 2009.

The ninth is a real treat, a major new Kindle exclusive cookbook from Cook’s Illustrated, and it alone may help you to expand the ways you have considered using your Kindle. The promotion allows Amazon to show off how the Kindle 2’s new, crisper display, zoom feature, and better hands-free functionality are more cookbook-compatible than its predecessor.

Finally, the tenth link here isn’t free, but it’s for an accessory that I highly recommend, especially if you think you might use the Kindle 2 either as cookbook repository or as a read-aloud companion while you are in the kitchen. M-Edge, which has emerged as a leading supplier of attractive Kindle covers for the original Kindle, has come out with a great selection of Kindle 2 covers that double as stand-up hands-free Kindle platforms. They range in price from faux-leather models at the same $29.99 price that Amazon is now charging for its branded cover to $54.99 (currently discounted to $44.99) for very attractive genuine leather models in several colors. Just visit the Kindle 2 Accessories page and scroll down (if you can!) past those dreamy three-figure designer covers from Cole-Haan.