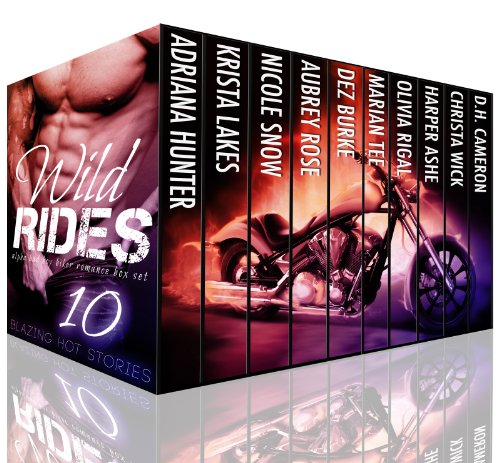 Slip into a set of leathers and climb aboard. It’s time to feel the wind in your hair and the hard rumble of a motorcycle between your legs as today’s hottest romance authors take you on 10 wild rides you’ll never forget!

Filled with Prairie Devils, Steel Infidels, Iron Tornadoes, Thunder Gypsies and other alpha bad boys on big hard bikes, this special collection brings you 10 of the hottest biker and MC romance stories ever told from the hottest New York Times, USA Today, Amazon and Barnes & Noble bestselling authors in the romance genre – all together in one amazing box set!

Safe House – Dez Burke (NYT/USAT). An outlaw biker. A gentle veterinarian. Flint knows she would never fall for a bad guy like him. Or would she?

Rage – Christa Wick (NYT/USAT). A shy waitress risks her life to save an outlaw biker from his own motorcycle club. Now they’re on the run – together.

Riding Danger – Adriana Hunter (NYT/USAT). A curvy nurse finds herself caring for a motorcycle club vice-president with a shady past.

Swish – Marian Tee (NYT/USAT). Aloof bike racer billionaire does everything not to fall for a tomboyish camera-wielding college student.

Stone Cold – Olivia Rigal. A curvy student suspects the motorcycle club of her former lover to be responsible for her brother’s murder.

Worthy of the Billionaire Biker – Krista Lakes (NYT/USAT). He once saved her from a biker brawl, but now this CEO demands more of her. Much more. Will she prove herself worthy?

City Girl, Country Wolf – Aubrey Rose (NYT/USAT). A curvy city girl stranded on the side of the road finds her wilder side on a motorcycle.