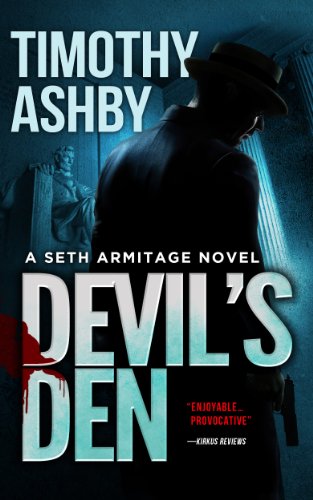 by Timothy Ashby
5.0 stars – 29 Reviews
Kindle Price: 99 cents
Kindle Countdown Sale! Low Price Won’t Last!
Don’t have a Kindle? Get yours here.
Here’s the set-up:
It’s the early 1920s. Someone is killing old Civil War vets. Whatever for? Troubled young G-Man Seth Armitage is assigned by the Bureau to find the killer. Another mystery–why does the corrupt Harding administration care about these old soldiers, and why would they send a shell-shocked newbie to investigate? Green though he may be, Seth is much sharper than anyone bargained for. As he investigates this strange crime, the very forces that put him on the case seem to be obstructing it, and before he knows it he’s running from the KKK, hounded by the ambitious young J. Egar Hoover and entangled with a beautiful blond who may be much less innocent than she appears. A fast-moving and compelling historical thriller featuring meticulously researched real-life characters, Devil’s Den brings to life that fascinating and emotionally rich period between WWI and WWII in America. The 20s were roaring, both the Civil War and WWI still haunted living memories, and Prohibition was bootlegging its way in. For fans of historical fiction like Caleb Carr’s The Alienist, and such nonfiction works as Erik Larson’s Devil in the White City.
Reviews

“As I read Tim’s book, it occurred to me that this is the historical novel I wish I’d written…Devil’s Den: a tour de force of historical fiction. Make sure you read it…”   Dr. John Eipper, Editor In Chief, WAIS.

“…an amazing work of historical fiction that takes place in the 1920’s. Tim has incorporated facts from the Civil War and the corruption from the Harding Administration to craft a…book that holds the readers’ attention and makes you want more.  Amazon:  Billie Litton

And here, in the comfort of your own browser, is your free sample of Devil’s Den by Timothy Ashby:
Search