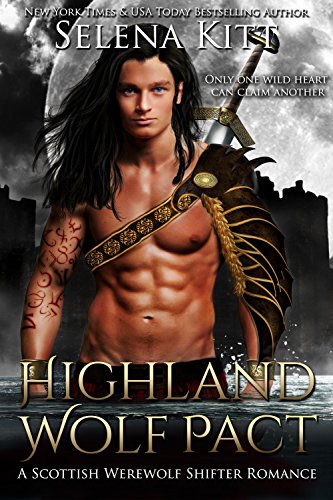 Only one wild heart can claim another…
A Scottish Wolf Shifter Romance with more than 440 rave reviews!Highland Wolf Pact
by Selena Kitt

Save 80% with this Kindle Countdown Deal!

Sibyl Blackthorne isn’t afraid of anything—except maybe being sold into marriage to a man she doesn’t love.

Everyday Price:
Get It Now
Deal Ends: 2/2/2018
See more by this author!
Categories: All Romance; Bestsellers

4.8 stars – 187 Reviews
Kindle Price: 99 cents
Text-to-Speech and Lending: Enabled
Don’t have a Kindle? Get yours here.
Here’s the set-up:

Sibyl Blackthorne isn’t afraid of anything–except maybe being sold into marriage to a man she doesn’t love. A man she’s never even met. A man who, by reputation, is one of Scotland’s cruelest lairds in over a century.

But what choice does she have, with her father dead and her uncle now married to his brother’s widow, putting him in charge of not only the Blackthorne fortune, but Sibyl’s future as well?

Then her betrothed turns out to actually be far worse than his reputation, so headstrong Sibyl decides life as a peasant, or even death, would be preferable to a future with such a despicable man, and makes plans to run away.

On an organized hunt for wolves–or, as the Scots call them, wulvers–Sybil escapes her fiancé’s clutches, only to find she’s run into something far more untamed and dangerous in the middle of the woods.

When a big, brawny, long-haired man, who only speaks to her in Gaelic and calls himself Raife, simply picks her up and carries her off with him into the Scottish wild, Sibyl knows she’s in trouble.

When he takes her to a place no human has ever been, she knows she’s gone over the edge.

And when he, at last, marks her as his own, she discovers that only one wild heart can claim another.

Note To Readers: This is the extended version with over 10K words of new material and a BONUS epilogue and preview of the SEQUEL!

5-Star Amazon Reviews
“… Well written and very enjoyable story to read. Fast paced and kept my interest.”
“… I loved this book and if you love hot sexy shifters and some steamy romance this is a book you will want to read!!”
“This is a whole new twist on werewolves… The characters were well established and the story was a fast paced one with hatred, lust, love, betrayal, loyalty.”
“Another smokin’ hot erotic journey with Selena Kitt, the historic aspect of the book is detailed and picturesque. I’m buying a plane ticket to find my own hot wolf. You’ll love this tale….and the tension between Sibyl and Allistar…”