Lord of the Black Land: A Dark Epic Fantasy: Part One (War of the Moonstone Book 1) 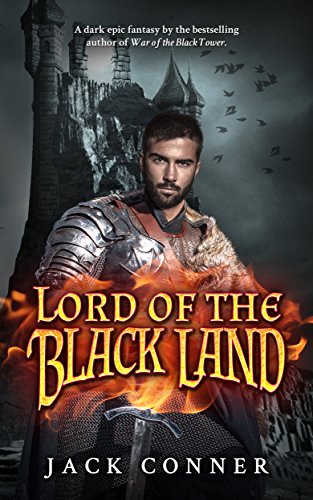 4.3 stars – 40 Reviews
Kindle Price: FREE!
Text-to-Speech and Lending: Enabled
Don’t have a Kindle? Get yours here.
Here’s the set-up:

Epic fantasy adventure by the bestselling author of the Black Tower Trilogy, “Lord of the Black Land: Part One” is the exciting opening of an epic fantasy / dark fantasy trilogy.

Dark times have come to the kingdom of Felgrad. Once one of the jewels of the Crescent, now the dark powers have turned their gaze upon it, and Giorn Wesrain, son of the baron of Fiarth, has become inextricably drawn into the machinations of the Dark One, along with his beloved Niara, High Priestess of Illiana.

Their love will be tested as the armies of the enemy strive against Felgrad. Worse, one of their own, Raugst, is in truth an agent of the Dark Lord, and Raugst will soon bend the barony to his will. If Felgrad falls, so too will the rest of the Crescent, and then the Dark Lord will be unleashed upon the world.

Only Giorn and Niara can stop him, but how can they when the legendary Moonstone, the great artifact of the Light that has kept the fell powers at bay for thousands of years, has been taken? As Giorn sets out into the waste lands after it, to either reclaim it or find out what the Dark Lord wants it for, enemy hordes swarm the mighty city of Thiersgald and Niara is trapped behind its walls . . . with Raugst.

˃˃˃ This is only the beginning of the dark fantasy / high fantasy adventure that awaits you in “Lord of the Black Land: Part One of a Dark Epic Fantasy Trilogy”

“Jack Conner has written an amazing dark fantasy. He has taken original themes and created something amazing. I look forward the reading more of Jack’s work in the future.”

And here, in the comfort of your own browser, is your free sample of Lord of the Black Land: