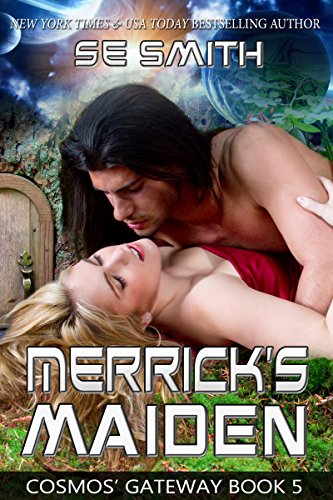 5.0 stars – 1 Review
Kindle Price: $3.99
Text-to-Speech and Lending: Enabled
Don’t have a Kindle? Get yours here.
Here’s the set-up:
Merrick Ta’Duran is the powerful leader of the Eastern Mountain Clan on the Prime world of Baade. His people, known as the Ghosts of the Forests, live high in the Eastern mountains. Merrick feels the weight of responsibility as the males within his clan become desperate to find mates among the few remaining females. When word comes that a new species has been discovered, he knows he must do what is right for his people – even if it means traveling to a strange, alien realm to do it.

Merrick’s world changes when he is injured and captured by a ruthless group of humans. Drugged and held against his will, he is the subject of experiments and testing as the humans try to discover where he came from and duplicate his strength and ability to heal quickly. After months of captivity, he fears his life will end on the strange world until one chance encounter gives him hope.

Addie Banks’ world has been one of silence since a devastating illness when she was sixteen. Determined to stand on her own two feet, she goes to school during the day and works at night to put herself through college. Her life unexpectedly changes when she stumbles across something she wasn’t supposed to see while at work. Now, she hears a voice in her head – and it is driving her crazy. Her only hope for peace is to help the creature talking to her escape from the men holding him.

Merrick knows the female who helps him is his bond mate. She may deny it. She may fight it. She may even try to run from it. It won’t matter. She is his and he will do everything he can to convince her, hold her, even kidnap her if that is what it takes to make her realized that they belong together.

Will Addie hear the love and longing in Merrick’s voice? Can she trust and accept the new life he has to offer? Or, will a ruthless killer silence him before she gets a chance?
5-star Amazon review
“S E Smith did it again AND she did it better!! I love each of the stories in the series but what keeps me coming back is Smith’s ability to create, share, and expand on budding relationships and personalities. Never disappointed with a S E Smith book!”