Love and Magic I: 9 Paranormal Romances: A Multi-Author Box Set 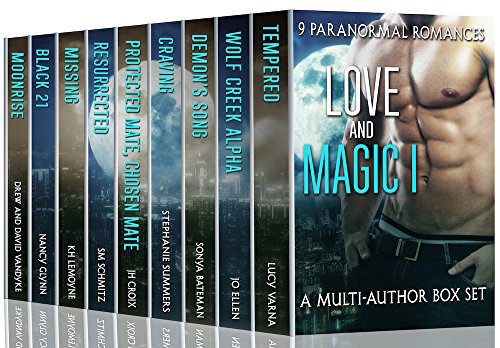 Kindle Price: 99 cents
Or FREE with

Nine engrossing novels of Paranormal Romance await you! Over half a million words and almost two thousand screen pages of fantastic fiction by nine talented independent or small-publisher authors. Some are shifter stories, others include vampires, witches, faeries or other users of magic, but all are set (more or less) in the modern world and are sure to stir your heart — and perhaps other things. 😉

Tempered by Lucy Varna. Hawthorne the Chronicler’s untrusting heart is tempted by handsome comic book illustrator Aaron Kesselman, complicating her long, lonely existence at a time when such a distraction could cost her and her family their lives.

Wolf Creek Alpha by Jo Ellen. Lisa is shocked to discover she’s a witch with an alpha werewolf as a mate. Rafe protects his pack and the magical pond, which the Queen of Faery has gifted them. Keeping his new mate safe from an evil Fae will take the strength of his pack, cougar shifters, and a good Fae warrior to save Lisa from the dark Fae’s hunger for power.

Demon’s Song by Sonya Bateman. A demon’s job is to corrupt as many souls as possible. But for Jaeryth, there’s only one soul, one woman he’s interested in: Logan Frost. His obsession with her causes his performance to suffer, so the Prince of Hell strips him of his demonic status and sends him to the mortal realm on one last mission — turn Logan to Hell’s side, or kill her.

Craving by Stephanie Summers. Sabine Crowley, the next chosen one, has to give up her life to fulfill the pact her townspeople made with the vampires. She’s paired with Remy, a cocky vamp who’d rather be anywhere but with her in Willow Creek. Will they ever work past their contempt for one another and act on their unexplainable attraction to one another? Or are they doomed to hate each other forever?

Protected Mate and Chosen Mate by JH Croix. In Catamount, Maine where mountain lion shifters have existed in secret for centuries, the community is in turmoil after the startling death of one of their shifters. The Catamount Shifters Series brings you two love stories filled with passion, steamy romance, and adventure.

Resurrected by S. M. Schmitz. Dietrich thought death was final. But he was wrong. When Dietrich’s dead fiancée is resurrected by a mysterious force, her existence threatens to undermine the lucrative business that made her resurrection possible, and he will have to discover just how much he’s willing to sacrifice for the woman he once loved.

Missing by KH LeMoyne. An alpha losing control of his power. A desperate mother and son. The female PI determined to save them all.

Black 21 by Nancy Glynn. Growing up sheltered by an overprotective father, gifted Daisy Lock was determined to be independent and free, but freedom comes with a grim price. What appears to be an innocent family visit in the country turns into a dark favor asked by a stranger.

MoonRise by Drew VanDyke and David VanDyke. When travel writer and werewolf Ashlee Scott returns to her hometown to recuperate from a shooting, she must confront a place full of painful and pleasant memories while dealing with her identical twin sister Amber and the complications of family. Throw in the full moon, old boyfriends, old ghosts and new enemies, and Knightsbridge Canyon will never be the same for her again.