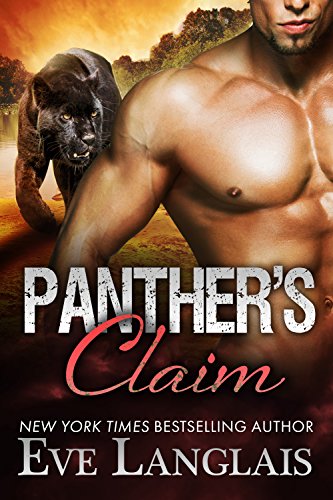 4.7 stars – 54 Reviews
Kindle Price: $3.99
Text-to-Speech and Lending: Enabled
Don’t have a Kindle? Get yours here.
Or check out the Audible.com version of Panther’s Claim (Bitten Point Book 2)
in its Audible Audio Edition, Unabridged!
Here’s the set-up:
Cynthia: So I met a man.
Mom: Is he single?
Hitting on the wrong woman finds Daryl regaining consciousness in a motel taped to a chair. Things were looking up–and not just below the belt.
A sexy, cocoa-complexioned veterinarian–with killer curves–wants answers, and he’s only too happy to give them to her, for a price, say a kiss, or something more, from those luscious lips. The problem is Cynthia isn’t the type to fall for flirty words and panty-dropping smiles. She tempts Daryl into helping her. Teases him into acting. Claims his heart without even trying.

But that was okay because…She’s mine…and someone was trying to hurt her.

This kitty isn’t afraid to unleash his claws and rescue the woman he wants.

An intriguing, hot woman, a mystery, and danger? Sounds like fun, and Daryl is ready to play. He’ll do anything to claim Cynthia as his mate.

5-star Amazon reviews:
“OH my what a book. Eve Langlais is one author that never disappoints in a story and this one is no different.“
“The storyline will have you glued to the pages it is so exciting!“
“It not often you get a fast paced suspense book with so many humorous moments. The second installment in the Bitten Point series does not disappoint. The hero will make you purrr and the heroine will have you howling with laughter.“
Click here to visit Eve Langlais’ BookGorilla author page