With narrative clarity and character development reminiscent of John LeCarre, novelist DL Rose weaves an intricate tale of love, politics and prejudice amidst the backdrop of terrorist revolutionary activity in Shepherds of Terror: A Novel. 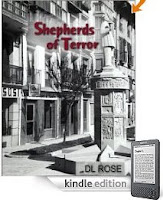 Shepherds Of Terror takes place in the homeland of the Basque people of Spain. It follows the lives and actions of Basque terrorist ETA members and innocent folks who are affected by the daily barrage of violence.

More than just a story of terrorist acts, Shepherds Of Terror is also a character study of the people fighting for their Basque autonomy from the Spanish government and, also, the Basque people as a whole.From the novel:“La Guardia, who seemed less formidable with sweat saturating their once-starched shirts, piled boxes, guns, ammunition, and grenades in the yard. The butt of a machine gun slammed between Luís’ shoulder blades and he stumbled down the porch steps, trying to keep from falling. As soon as he was steady, the butt hit him again, pushing him forward across the yard. Luís would have willingly gone to wherever they wanted but he couldn’t tell which truck to head for.Over and over, he was hit in the exact same place until the last slam to his back bent him over the front of a jeep and Luís screamed as the side of his face sizzled on the sun-scorched, engine-heated hood….”

From the reviewers:Passion, terror, poetry and the fierce urgency of a people held down too long … it all comes alive in this stirring first novel by DL Rose. The Basque cause comes vividly to life on page after page, and each character is drawn with love and vitality. Kudos for an impressive debut by an active citizen of Kindle Nation and occasional contributor to Kindle Nation Daily: The inside scoop on all things Kindle. –Stephen WindwalkerIn her first novel Shepherds Of Terror , D. L. Rose weaves a intriquing tale about a small band of terrorists within the Basque separatist movement in 1970s Spain. With its perfect mix of mystery, romance and excitement, this highly enjoyable novel is guaranteed to keep you entertained from beginning to end. Shepherds of Terror by DL Rose is an exciting examination of love and prejudice amidst the backdrop of terrorist revolutionary activity.Reviewer R.D. Simonson adds:   With John Le Carre-like clarity and character development, DL Rose weaves an intricate tale of love and politics in her first book. Set during the 1970s in both London and the Basque region of Northern Spain, Rose takes the reader on a journey with a small group of young ETA terrorists seeking their identity both personally and as a group during and after the time of Franco’s brutal rule of Basque country. Interwoven with this is a poignant but shocking romance that will engross readers – a love that was even more taboo, challenging and dangerous in the 70s than today. You’ll smell the dust of the fields and the aromas of the markets in this engaging fast-paced read. From the Author:The writing of this novel happened spontaneously from being in northern Spain and seeing first-hand, daily, the open and in-your-face activities of ETA. If one is out and about, especially in the city of Bilbao, you experience their annoying pranks, watch them paste posters everywhere, and see their ETA propaganda. One can’t help asking what it’s all about.  The Basque people in every northern Spanish town are more than willing to sit down on a park bench or in a bar and tell you what it’s like to be Basque today, while the older folks relate horrific tales of life during Franco’s long reign. When you visit schools, teachers will discuss the difficulty of dealing with today’s rebellious Basque teenagers and young adults. I spoke with people every day, gathered notes, memorabilia, news articles, and personal memories. It’s amazing how these special people crave to tell their personal stories. They  motivated me to write about it. After returning to the states, I began researching the Basque problem from an historical point of view and found that the Basque fight for autonomy has been going on for centuries…a time-period too long to tackle in a story. On a more personal note, today I enjoy a quiet life in Montana…working, visiting family, staying connected to the world electronically, reading on my Kindle, rafting the majestic rivers, and taking an occasional vacation to somewhere with an ocean. -DLR

By DL Rose
Author of Shepherds of Terror

So I wandered into my local Barnes & Noble bookstore yesterday to browse the bestsellers.  Yes, I’m a huge Kindle fan, but I also like my hardcover library.  The trouble is, as I was perusing I kept telling myself how many Kindle books I could get for the same price as one hardcover.
Also, what seemed most available at B&N were authors who were well known to everyone.  The beauty of Kindle, for me, is having found treasures by reading books written by authors who I’ve never heard of but are every bit as prolific and entertaining as any of the top ten … and for a fraction of the cost.
I’m sure others, including some who have found and read my novel Shepherds Of Terror

, can say the same thing.  For a first-time author like myself, publishing for the Kindle has given me an opportunity to share my book with folks who would never have heard about Shepherds Of Terror

.  And where, you might ask, does one find these treasures?
A year ago, before I even received my new Kindle, I found this nifty weekly newsletter called Kindle Nation. It’s about all things Kindle, including free and low-cost books.  Well, I purchased many books though the Kindle Nation links even before my Kindle arrived.  I was hooked, still am.
Not only do I look forward to my e-mailed version of Kindle Nation every Tuesday, but with the Kindle edition I also receive updates on pertinent issues and links to free books all during the week

.  Waahoo!  No, this isn’t a paid Kindle Nation ad, it’s me just telling my story and saying thanks!!!

(Editor’s Note: If you haven’t read Rose’s novel set in London and Basque Spain, you can click here for the excerpt that we featured as a Free Kindle Nation Short last Fall.)