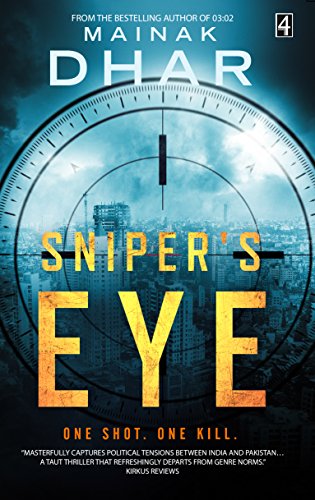 “Mainak Dhar’s writing flows, takes no breaks from being awesome, and delivers a cracker of a story!” – New Indian Express
“Dhar masterfully captures the political tensions between India and Pakistan…A taut thriller that refreshingly departs from genre norms with its multilayered protagonist and South Asian setting.” – Kirkus Reviews

“A smart and adroitly written thriller…packs a powerful punch with its fast-paced, edgy and nuanced storyline.” – The News Now

ABOUT SNIPER’S EYE
I was out on a date. Everything was perfect… Till that shot… a high-calibre one, no apparent sound. And, the man in front of me fell. A rifle with a suppressor? A sniper in the middle of a Mumbai mall? As the body count mounted, I was soon sucked deeper into the chaos unleashed by that shot. To survive and save those whom I care about, I have to become the man I left behind. I have no choice but to tap into a bloody past that has put me on the terror kill list. I may also have no option but to join hands with the sniper terrorising Mumbai. The problem is that the man has sworn to kill me. In a world where the young and poor kill and die in conflicts started by the old and rich, I and my unlikely companion finally discover the thin line that separates a mere killer from a hero. This is our story…