Start saving money today with our FREE daily newsletter packed with the best FREE and bargain Kindle book deals. We will never share your email address!
Sign Up Now!
This morning’s latest additions to our 200+ Free Book Alert listings cover a wide range of interests from crockpot recipes to social media and marketing innovations….

But first, a word from … Today’s Sponsor
A straight 5-star rating for this short story collection the author calls, “Eros and Thanatos. Stories of sex and death“… 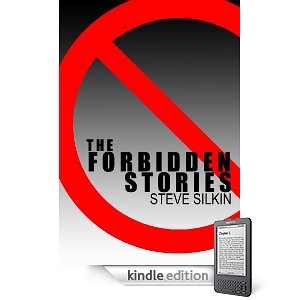 “These are great stories. Really enjoyed them. Transgressive, odd, some straight ahead, some dreamlike and surreal. Highly unusual and original.”
–Daniel Loeb

“Forbidden, yes, but read it anyway!”

is a collection of vivid, expertly crafted fiction stories spanning a wide range of events (growing up as a kid in Los Angeles, traveling to Europe, living in France) told with passion, nostalgia and – some of them – a relaxed wisdom that borders a zen-like attitude… Anyone who wants to explore the human condition will appreciate the multilayered “Green Parrot at My Window” – a complex story about death and the inextricable EXIT sign that awaits us all. A tangled criss-cross of relationships develops in “The Cake Girl”, “Euro-Looting” and “La Hongroise”- stories in which the author, part mastermind and part subject, keeps a keen eye on what’s happening around him while himself progressing as a character along the story.

Yet for all their significant metaphorical content and multidimensional messages, these stories are charmingly accessible and captivating and speak about the universal value of human relationships. This is a great collection of stories – and a must for literature lovers.”


Did you love L.A. Confidential? Boogie Nights? The Candidate? Pulp Fiction? Weave them all together into a smart, edgy, fast-paced political thriller that you can read right on your Kindle for less than two bucks, and you’ve got Steven Silkin’s The Cemetery Vote.

What the Reviewers Say
“These stories, forbidden or not, are written in prose so clear it’s nearly transparent, allowing you to see all the way to the deep sense of loss that lies like muck at the bottom. Maybe that’s why they’re forbidden; the current’s strong, and you can’t tell how deep the water is. Still, each piece is laced with enough humor and insight to keep them from feeling like they’re going to pull you under. I’ve enjoyed Silkin’s other books but this one’s my favorite, and not just because I have a crush on Cake Girl.”
–R. Toady

“After reading Silkin’s “The Cemetery Vote

” I couldn’t wait to sample more from this perceptive talent. I’ve read all his books now, but this one was my favorite. With “Forbidden Stories

” Silkin has taken that forbidden step into the dark recesses of human relationships, and this is something that most of us dare not do. What makes this collection of stories so disconcerting is that they resound with the clear ring of truth.
–Gregory J. Barina

–is bolstered by this latest collection of stories, some autobiographical, some semi-autobiographical, and a few completely imagined, set mostly in Europe and the far reaches of the LA suburbs in the days before the freeways were even finished. Written without any pretense (think of Hemingway or Fitzgerald wandering the San Fernando Valley), the tales exhibit Silkin’s overriding desire to communicate many things–among them feelings of sadness and loss, with some youthful jubilation occasionally peeking through. If you’re looking for a well-written title with pathos, humor and other actual, human emotions, step away from the James Franco…and buy or download Forbidden Stories

(or a free sample) to your Kindle, iPad, iPhone, iPod Touch, BlackBerry, Android-compatible, PC or Mac and start reading within 60 seconds!
UK CUSTOMERS: Click on the title below to download
The Forbidden Stories
Each day’s list is sponsored by one paid title. We encourage you to support our sponsors and thank you for considering them.
Authors, Publishers, iPad Accessory Manufacturers:
Interested in learning more about sponsorship? Just click on this link for more information.
Free Contemporary Titles in the Kindle Store

Not that it is my job to state the obvious, but Kindle Nation readers don’t need me to tell them that not every fine novelist can write a great short story. Which is probably a part of why so many very talented novelists submit excerpts of their novels rather than free-standing short stories to the Free Kindle Nation Shorts program. Not that there’s anything wrong with that: the generous excerpts offered here often lead our readers to discover terrific new novels and distinguished new novelists who come to occupy the top shelves in our Kindle libraries.

But I wasn’t sure what to expect when Steve Silkin offered three of his short stories to share with our readers through the program. I had already made it clear what I think of his talents as a novelist, when I wrote at our Kindle Nation blog back in November:

Did you love L.A. Confidential? Boogie Nights? The Candidate? Pulp Fiction? Weave them all together into a smart, edgy, fast-paced political thriller that you can read right on your Kindle for less than two bucks, and you’ve got Steven Silkin’s The Cemetery Vote.

Now that I have read Mr. Silkin’s stories, I can tell you he is one of those rare writer who is as comfortable in the short-form arena as he is with the form of the novel. His gifts for observing the human animal in its various habitats are not lost in the shorter form, and he tells his stories with the same wit and command that animates The Cemetery Vote.  And it doesn’t hurt that he is offering the collection of stories at the same great $1.99 price that has been set for the novel.
Scroll down to begin reading three free short stories by Steve Silkin
Click on the title below to download the complete collection of stories to your Kindle or Kindle app for just $1.99!