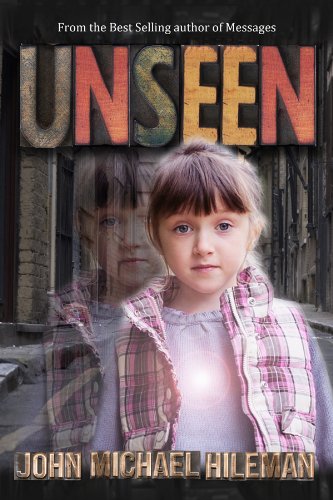 5.0 stars – 25 Reviews
Kindle Price: 99 cents
(Regularly $4.99)
Or currently FREE for Amazon Prime Members Via the Kindle Lending Library
Text-to-Speech: Enabled
Don’t have a Kindle? Get yours here.
Here’s the set-up:

Life for Jake Paris is stable and ordinary–until a mysterious old woman pays him a visit and he begins to have encounters with unruly children everywhere he goes—children only he can see.

When Jake’s estranged sister, Holly, finds herself the target of a national serial killer who has chosen her son as his next victim, Jake begins to wonder if there is a connection. Could these children be the ghosts of the killer’s victims?

As the kidnapper’s plan unfolds, Jake uncovers a startling secret about the unseen children that will change his life forever–and Holly discovers just how far she is willing to go to save her son. Unseen is a riveting story of rescue, restoration, and romance that will leave you thinking long after the last page has been turned.

“Prepare to have your core shaken, heart squished, and emotions rocked.” ~Amazon Reviewer

After serving in the U.S. Army, John Michael Hileman started a small 3D animation company. From there he was hired as production director for a television station, where he oversaw the production of three semi-national television programs. In his spare time, while being a faithful husband and father, he authored his first book, VRIN: ten mortal gods, which later placed in the top four of a national writing competition. Encouraged by this, John went on to write the #1 best selling thriller MESSAGES, and his latest release UNSEEN. The rest is yet to be written.