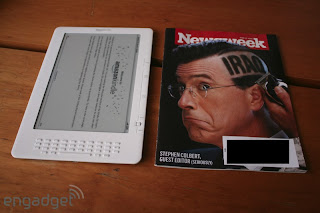 ©Kindle Nation Daily 2010
Was the Kindle DX ever out of stock?
Since last week the new Kindle’s Amazon product page has been stoking the flames of gadgeteer anxiety with messages claiming that freshly placed orders would ship within 7 to 10 days. New orders placed yesterday, June 9, showed a delivery date of June 16 (June 15 with one-day shipping). Naturally, Amazon exposed itself to various forms of criticism, most notably:
Whatever the underlying problems or motivations, Amazon now appears to have solved the problem before it even begins shipping the Kindle DX today.
Here’s a screenshot of the Kindle DX product page as of 10 am EDT today, June 10, showing the DX is back in stock. Order yours today and you should have it this week!

Three additional tips, while you are at it:

Update: Just to verify one other thing. Kindle DX orders placed this morning with one-day shipping are indeed now showing a delivery date of June 11.