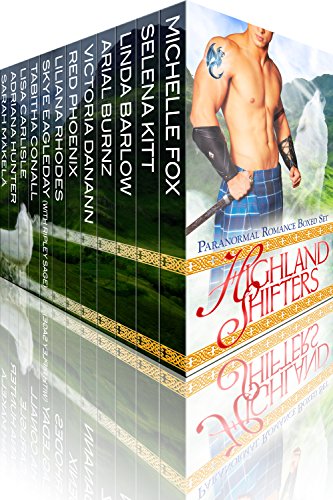 Find out what’s under that kilt in this collection of steamy shapeshifter romances! NY Times and USA Today bestselling authors such as Selena Kitt, Michelle Fox, Tabitha Conall, Adriana Hunter and Liliana Rhodes offer stories featuring hot alpha shifters in kilts. Most of the 12 stories in the collection are brand new!

Are you ready to peek under the plaid?

Her Scottish Alpha by Tabitha Conall: In the midst of trying to figure out their mating, Alpha werewolf Lachlan and dragon slayer Keira have to find Keira’s missing sister, fight a war and save Lachlan’s life.Liulf by Victoria Danann: For two thousand years the Scotia werewolves have enjoyed the protection of the Fae Monarchy, but the world is changing and the tribe must adapt or face extinction. Or move.

Highland Wolf Pact by Selena Kitt: Englishwoman Sibyl Blackthorne escapes her arranged marriage to a cruel Scot only to find herself in the arms of something even more dangerous – and discovers only one wild heart can claim another.

Kiss the Dragon by Michelle Fox: A cursed dragon finds his maiden is already claimed by the future. If he can’t save her, she can’t save him.

By the Light of the Scottish Moon by Red Phoenix: Bryn, the pack leader, is so lost in his own pain he can’t see beyond it. Freya is dying & has come home to Scotland.to say goodbye. Her fate lies in his hands – but to save her he must kill her.

The Highlander’s Mate by Liliana Rhodes: Centuries after an ancient curse on his clan tore werewolf Bran MacCulloch away from his mate Ainsley Drummond, he catches her scent on the breeze. But how can it be her?

Highland Moon Rising by Sarah Makela: When wereleopard Caitlyn returns home to see her werewolf half-brother after he’s rescued from scientists, she’s imprisoned by the Pack. Will the Alpha who hungers for her be the protector she needs?

Knights of Stone by Lisa Carlisle: Gargoyles, tree witches, and shifters have divided their Scottish isle. When a witch breaches into another territory, she’s tempted by a forbidden attraction that may affect the future for all.

The Zrakon’s Curse by Linda Barlow: Sea dragon shifter Colin Malloch’s need for a mate draws a woman from another world into grave danger. How can he keep her safe when his own brother demands her life?

To Tame a Highlander by Adriana Hunter: Curvy nurse Aspyn Montgomery’s night takes a sudden turn when a patient she watched die suddenly turns up at her apartment desperately needing help. Can fated love triumph over the threat of war?

Roots and Fang by Skye Eagleday & Ripley Sage: When McKay takes a male Fae lover it triggers the deadly jealousy of the powerful Pooka shape-shifter the Fae abandoned. Can love conquer all when only one of you is human?

Midnight Hunt by Arial Burnz: As Broderick unravels the mystery of why Monika reminds him of his late wife, his quest for answers causes a chain of events, starting a witch hunt, dooming them both to the fiery stake of judgment. 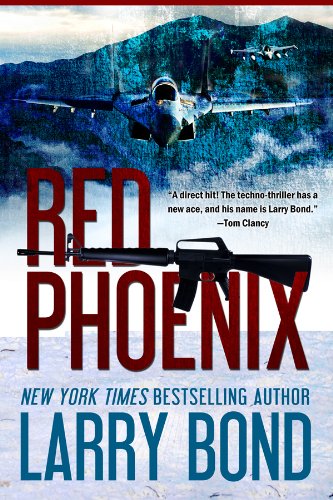 “A direct hit! The techno-thriller has a new ace, and his name is Larry Bond.” –Tom Clancy

In the aftermath of a series of student riots in Seoul, the U.S. Congress rushes a bill into law calling for the complete withdrawal of American troops from South Korea. This sets off a chain reaction: North Korea attacks across the DMZ, Russia supports North Korea, the Chinese remain neutral, and the United States fights again alongside its South Korean allies. The full range of ground, air, and naval forces take part in vicious combat, first to hold off the North Korean onslaught, then drive them back.

Bond, Tom Clancy’s collaborator on Red Storm Rising , here makes his first–and impressive–independent contribution to the technothriller. “Red Phoenix” is the code name for the novel’s catalyst: a North Korean invasion of the south. Bond establishes a credible scenario of megalomanic North Korean leadership taking advantage of disruptions caused by ill-advised U.S. economic sanctions against the Seoul government. He then proceeds to “refight” the first weeks of the Korean War, this time with things done right, resulting in a kind of conflict for which U.S. forces are ideally suited: a mid-intensity conventional war for limited objectives. South Korea’s government and armed forces prove resolute and efficient. The U.S. President declares a national emergency. The implied contrasts to Vietnam hardly seem accidental. But the nature of the response to the attack combines with the exponential discrepancy between the combatants’ military strengths to make the novel’s individual episodes more suspenseful than the course of the war as a whole. Bond’s writing is strongest at the tactical and operational level. Whether describing infantry combat, air-to-ground attacks or anti-submarine operations, he demonstrates a sure grip on weaponry and military methods. His principal characters–the U.S. commanding general in Korea, an infantry lieutenant and his South Korean counterpart, an F-16 pilot–carry their parts of the story effectively, not least because Bond concentrates on what they do rather than on who they are.

“Displays a Knowledge of modern weaponry and war that can only be described as state-of-the-art.” –Stephen Coonts, best-selling author of Final Flight

Red Phoenix is a shocking new chapter of a tragic disaster that might very well stun the world by becoming a reality. Larry Bond has proven himself a master of master of military adventure.” –Clive Cussler, bestselling author of Treasure

LARRY BOND is the author of numerous New York Times bestselling thrillers, including Vortex, Cauldron, and The Enemy Within. He previously worked with Jim DeFelice on the Larry Bond’s First Team series. A former Naval Intelligence officer, warfare analyst and anti-submarine technology expert, he makes his home in Springfield, Virginia. Connect with Larry on Facebook: http://www.facebook.com/pages/Larry-Bond/120841761301353.

And here, in the comfort of your own browser, is your free sample of Red Phoenix: