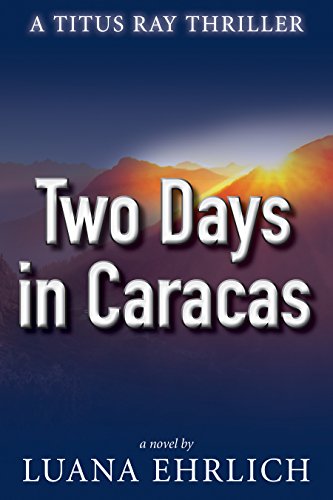 Titus faces a threat he never imagined.
Can he capture Ahmed Al-Amin before it’s too late?
Confronting a new operative . . .
When veteran CIA operative Titus Ray arrives in San José, Costa Rica, and meets fresh-faced Ben Mitchell, a hot-tempered new operative with barely any experience in the field, he has a choice to make–ignore him or take him under his wing.

Facing an old demon . . .
In the middle of an active, ongoing operation, Titus is suddenly called back to the States where he must deal with the failures from his past and make decisions about his future with Detective Nikki Saxon.

Opposing a present danger . . .
In an effort to stop Hezbollah assassin, Ahmed Al-Amin, from murdering a high-profile government official, Titus travels to Caracas, Venezuela, where he learns the assassin is but one piece of a complicated international plot to deliver chemical weapons to some of America’s most dangerous enemies.

· Can his newfound faith sustain him when he encounters his old nemesis?

· Will he overcome the obstacles and capture Ahmed before it’s too late?

· Is it possible for him to have a future with Nikki?

Here’s what reviewers are saying about Titus Ray Christian Thrillers:
“I recommend these books for all who enjoy good clean fiction, especially those involving current events in the world. I like the development of the characters and their relationship. I gave it five stars for the great storyline and the characters that seem so real.” -Amazon review

“The characters are very well-developed and believable. I enjoyed the way the author described Titus Ray’s internal struggles and character flaws creating a very authentic main character. The story was action-packed and one is left wondering how the author could be so knowledgeable of the CIA and the work of their covert operatives.” -Amazon review

Text-to-Speech and Lending: Enabled
Don’t have a Kindle? Get yours here.
Or check out the Audible.com version of Two Days in Caracas: A Titus Ray Thriller
in its Audible Audio Edition, Unabridged!
Here’s the set-up:

Can he overcome the obstacles and capture Ahmed Al-Amin before it’s too late?

In this pulse-racing Christian thriller, CIA intelligence officer, Titus Ray, travels from Costa Rica to Venezuela in an effort to stop Ahmed Al-Amin, a Hezbollah assassin, from murdering a high-profile government official. Along the way, a family crisis jeopardizes his mission, and an Agency division head threatens to destroy his career. As the danger mounts, he’s forced to partner with an untested operative to complete the mission and bring Ahmed to justice. Will he make it in time?

˃˃˃ The hunt for Ahmed Al-Amin continues in Book 2 of the Titus Ray Thriller novels, a series of fast-paced adventures full of intrigue, romance, and suspense.

“Titus Ray makes being a spy so cool. I loved how he thought through situations before actually plunging ahead and I loved how his life is changing because of his commitment to Christ. It is so wonderful seeing a life become new because of Jesus. I also loved seeing his romance with Nikki develop too. I hope her third book will be coming out soon, because I have thoroughly enjoyed this series.”Goodreads review

Enjoy Luana Ehrlich’s Books? Tell us Why and Win a Free Book!