Let’s try a multiple-choice quiz as we wait for the Kindle Paperwhite to begin shipping this week, followed by the Kindle Fire HD 8.9” in November.

Which of the following will have their business disrupted the most by Amazon’s new generation of Kindles and Fires? 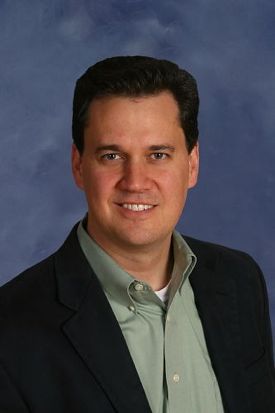 If you chose c) Apple, go to the head of the class, where you will find James McQuivey in his usual chair, making insightful comments about the latest in digital disruption.
McQuivey (photo at right), who is a frequent guest on The Kindle Chronicles podcast, has been analyzing digital media for more than a decade. In our conversation on September 24th, he began by suggesting that the new Amazon devices are designed to attack in multiple directions at once.

For publishers, the E Ink Kindles and Kindle Fires further entrench Amazon in the publishing business. This is not a game-changing development, McQuivey suggested, but more a continued building of the company’s strength in the book industry.
Instead, it is Apple that is being disrupted by Amazon’s latest offerings, especially the almost-iPad-sized Kindle Fire HD 8.9”. But McQuivey does not expect Apple to run scared.

“They have a better device,” he stated. “They also have a much more expensive device, so Amazon knows that they at least can start picking some of the lower fruit on that tablet tree.”

“That is going to be disruptive,” he continued, “mostly because now Apple has to stop pretending that there’s only one size of tablet in the world, and that price points can be whatever Apple decides they should be.”

This might remind Cupertino of the first time a credible challenge arose to the iPod from SanDisk and others, whose competing devices never amounted to anything, but did force big changes in the iPod lineup. That challenge is why there are now multiple iPod models, at better prices, and the competitive pressure eventually led to creation of the iPod Touch and even the iPhone, in McQuivey’s view.

“Amazon is going to push Apple out of just thinking of themselves as a tablet provider,” he said. “The biggest challenge to Apple is that Apple is now left holding only its devices—they don’t have a more comprehensive customer relationship to try to attach, which of course is what Amazon has.”

Amazon wants to sell us Dockers—I’ve bought two pair in the past month—a good book to read, some video games, and just about anything else you can imagine buying. A new toilet seat, perhaps, or, in McQuivey’s case, the Italian cocoa powder that he had ordered the morning I spoke with him. 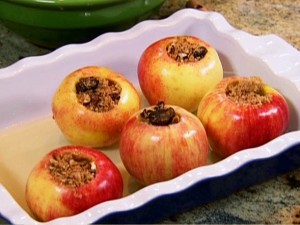 “That’s where they’re going to make their money in the long run, and Apple just doesn’t have that,” McQuivey said. “Apple doesn’t need it, as long as no one else is making competitively priced devices at least half as good as theirs.”

So in this round of moves by Seattle, Apple is being disrupted more than the publishing world. One change that is taking place in publishing, though, and not just because of the new Kindles, is a diminished role for Apple’s iBooks platform.

McQuivey said the Department of Justice action against Apple and five publishers charged with eBook price-fixing put an end to “Apple’s hope for ever becoming an alternative refuge for publishers to run to” and “certainly made it clear that Apple is not going to be a contender in the publishing world—at least not given current circumstances, devices and customer relationships.”

If you chose b) Wal-Mart as the player most disrupted by Amazon, you might be in line for a VP of Strategy position in Bentonville, Arkansas. That’s because Wally World finally figured out that Amazon is taking direct aim at its business, which led to last week’s announcement that Kindles and Fires will no longer be sold in Wal-Mart stores.

McQuivey expects that this decision will benefit Barnes & Noble, whose new Nooks will still be available at Wal-Mart.

“Wal-Mart still needs to present a credible list of devices,” he said, “and that’s going to have to include a lineup of nice Nooks.”

We have now covered all the possible answers to the quiz, except for one.
If you chose f) Dunkin’ Donuts, I like your style, and I’ll meet you at the Fresh Pond store for a glazed and a coffee, black, so we can discuss your theory further!

Kindle Nation Weekender columnist and contributing editor Len Edgerly blogs at The Kindle Chronicles, where you can hear his interview with James McQuivey in Episode 217. 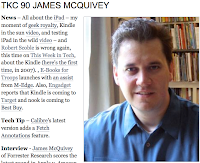 Ever since it first appeared in the Kindlesphere back in July 2008 Len Edgerly’s The Kindle Chronicles podcast has been a wonderful source of great information and insight into the Kindle Revolution, and Len’s interview with Forrester Research ebook expert James McQuivey in this week’s TKC #90 is an especially good take. I’ve snarked at McQuivey a bit in the past, but as developments continue to unfold his thinking seems to be ever more smart and more bold about what the future may hold and which new products and features may turn out to be gold if and when they are unrolled, get sold, and take hold.

Here are a few of McQuivey’s points that I found especially thought-provoking:

The only instance where I thought McQuivey had it seriously wrong was in his brief discussion of the iBooks Store vs. the Kindle Store as ebook vendors. He said “so far you can’t buy books in the Kindle App on the iPad, and that is a detriment.” But in emphasizing this distinction he seems to be handicapped by his self-avowed “conscientious objector” status relative to the iPad.

In the Kindle for iPad app, you get to the Kindle Store with either one (from the Home screen) or two (from within a book) clicks, and then you are in the extremely familiar, time-tested and user-friendly Amazon book retailing environment where you can download any Kindle title seamlessly and have it sent to your Kindle for iPad app (or any other registered device) within seconds. 15 years of online book retailing translates into tremendous strengths for Amazon, and the Amazon and Kindle Stores are far more conducive to searching, browsing, and sorting for books by title, author, subject, keywords, sales ranking, customer ratings, customer reviews, publisher, or publication date than the iBooks Store or any other ebook vendor’s site.

As with the Kindle Store, you can get to the iBooks Store with either one (from the Home screen) or two (from within a book) clicks, but once you get there the selection and buying/downloading processes are actual slower than those in the Kindle App due to the more difficult search/browse/sort processes described below and the fact that you actually have to type in your iTunes or Apple Store password (not your iPad passcode) from scratch each time you make a transaction.

And for now the iBooks Store is severely limited in several ways that aren’t surprising given the Apple has arrived a little late to the ebook party, including:

Apropos of nothing, by the way, I had to compliment Len on the creative casting masterstroke that was so evident in his selection of a well-known Disney classic canine cartoon character to read the Robert Scoble lines in the Scoble interview snippet Len chose (and included at exactly 7 minutes into this week’s show) to explain how Scoble’s “reading” practices may influence his choice of reading media.

Lastly, if you happen to hear Len’s discussion of the exciting progress of his fledgling eBooks for Troops project and would like to follow up as a participant, here’s a link to make the process friction-free: http://ebooksfortroops.org/