Two days before Amazon’s big Kindle press conference on Monday in New York, and here is a quick summary to put things in perspective:

* If you have already placed an order for the Kindle, you will be at the head of the line for the updated version that will ship in February. If you select 1-day delivery ($3.99 with Amazon Prime), you will probably receive your Kindle between February 12 and February 25, but a slight further delay is possible for most recent orders because Amazon will probably be shipping over a quarter of a million Kindles this month. (During the past 24 hours Amazon has updated my projected receipt date to February 25, from a window that began on March 4).

* It looks increasingly like the “switch” from the backordered “Kindle 1” to the ready-to-ship “Kindle 2” will be seamless, with no price change, no change in ASIN, and possibly even no designation of model “1” or “2.” I had earlier reported my expectation of a 10 per cent price increase, but I will be happy to concede error on that one as Amazon figured out that it could make the entire “switch” more seamless if it did not have to get permission for an additional charge on the hundreds of thousands of Kindle backorders in the pipeline. 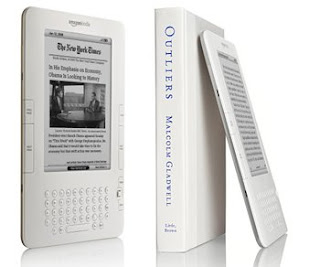 * While the primary focus for gadget heads may be form factor enhancements highlighted in the “leaked” pictures of the updated Kindle that have been showing up since October, those of us who actually own the Kindle will be more interested in software enhancements, such as content management folders, which will be rolled out Monday and transmitted wirelessly to all Kindles in the field over the course of this month in the form of a firmware version update.

* The most important Kindle “announcement” of February 2009 will probably turn out to have been a staffer’s tip that Amazon is “working on” apps that will allow users of devices such as the iPhone, the iPod Touch, and the Blackberry to buy books and other content instantly from the Kindle store.

* Before the end of 2009, the most important known Kindle metric will be the number of Kindle Store app downloads from Apple’s Apps Store. Say that three times fast.

Let’s plan to be in touch on Monday if you have a minute….

Yesterday Amazon let slip news that — for authors, publishers, and people who like to read on their cellphones — may potentially be every bit as big as anything the company will announce about the Kindle 2, 3, or 4 on February 9.

As suggested in my book last summer and in this January 30 post here and at my Amazon-hosted blog, the Kindle Store will soon begin selling its content to owners of devices such as the Blackberry, the iPhone, and the iPod Touch:

Amazon said that it was working on making the titles for its popular e-book reader, the Kindle, available on a variety of mobile phones.

So, do we still call a device a potential “Kindle Killer” if millions of its owners can use it to buy books, newspapers, and magazines from the Kindle Store, with Amazon getting a 25 to 35 per cent cut? No, Amazon’s Kindle initiative has much less to do with any specific hardware device than with Amazon’s need — and apparent ability — to stay ahead of changing modalities in book and other content sales.

As I have written before: “the primary importance of the Kindle for Amazon lies in four things: it jumpstarts significant electronic book sales; it positions the books in the Kindle store as the primary source of e-reader content; it sets the bar higher than it had previously been set for form factor, feature set, and delivery mode for electronic books; and it gives Amazon a seat at the head of the table in shaping this area of book commerce going forward.” That seat just got placed on risers.

For all the snarky Applephiles and Amazonians who have mistakenly seen this as an either/or battle from the get-go, a word to the wise: we can all just get along. Meanwhile, every ereading device and ebook portal including the Kindle and the Kindle Store will, no doubt, continue to scramble to play nice with the potentially astounding free public domain catalog available through Google Books. Neither Amazon nor Apple has any need to monetize that activity, but it is essential that Google Books access be part of the feature set.