If I say so myself, I think you will enjoy the conversation that Len Edgerly and I had about all things Kindle on this week’s Kindle Chronicles podcast almost as much as Len and I enjoyed the fresh blueberry pancakes I cooked up for the occasion Monday morning. Len should have the show “up” by this (Friday) evening, so click here to listen in and you’ll know the new show is live if you see something like this at the top of your screen:
TKC 41 STEPHEN WINDWALKER

And by the way, those of you who (like me) follow the Kindle Chronicles closely, should also be able to figure out what, as of this week, I have in common with Steve Martin (as opposed to Alec Baldwin, John Goodman, Buck Henry and Chevy Chase). Sorry Darlene, immediate family members do not qualify.

The Bottom Line: Is Kindle Content Coming to Your Computer?

In the April Kindle Nation survey, in the course of asking participants about other issues (DRM, text-to-speech, and the pricing of Kindle editions), I decided to raise another issue as quietly as possible: did respondents identify with the statement “I am concerned that Amazon may be developing a monopoly over digital books.” 129 respondents checked the box — 10.5% of the total. Enough to notice, but fewer than a third of the numbers that expressed concern about DRM, TTS, and the $9.99 controversy.

But sometimes real economic events influence public sentiment. It turns out Amazon may be serious about this Kindle thing. You heard it here first — a year ago in my guide for the Kindle 1 — that Amazon would make Kindle content available on other mobile devices such as the iPhone and iPod touch. Perhaps you didn’t pay too much heed when I wrote in the March 23 issue of Kindle nation that “Within months … Kindle books will be available on netbooks, iTouchTablets, Blackberrys, Macs, and PCs.”

Events are moving quickly now. Last night, while Blackberry owners were dreaming about when Kindle content would make it around to them, we learned that Amazon has purchased a tiny year-old company called Lexcycle that owns the fre

e Stanza e-book platform that has been downloaded by at least 1.3 million readers worldwide.

There’s plenty to sort out here. Just for starters:

So why did I begin with that passing suggestion that some Kindle owners may be concerned about the potential for Amazon to monopolize or otherwise dominate the world of ebooks? It’s pretty simple, really. While only 10.5% of our survey respondents expressed the concern, it is a growing concern among authors, publishers, and — least surprisingly of all — Amazon’s book retailing competition.

Amazon would probably love it if every one of its Kindle content and accessory partners took the approach of M-Edge, which is paying for huge ads in the New York City subways promoting the K

indle, like the one at the right (photo credit to Silicon Alley Insider). But some of us actually expect our relationship with Amazon to be a two-way street.

Personally, I have been concerned lately that Amazon seems willing to offer its marketing power very unevenly to authors and publishers. For instance, Amazon’s “right” to simply ignore small indie publishers who want to participate in the same kind of promotions that Amazon routinely makes available to Random House or Harlequin may seem like a simple contract prerogative to Amazon staff, but it’s not that simple. The more vertical and horizontal power that Amazon has in the book marketplace, the more the mega-retailer may find itself in a position similar, at least conversely, to the position of Blockbuster Video, Borders Books, and large publishers and distributors when they were litigation targets in years past for tilting the playing field to which smaller, independent business “partners” had access.

On the other hand, it is also entirely possible that Amazon will realize that its increasing digital content hegemony will increase its exposure either to litigation or fair trade scrutiny and, in a funny contrarian way, will thus become a little less arrogant, and a little more willing and able to act in ways that promote a level playing field and continue to open creative and business opportunities for independent content providers. That scenario, in the long run, would also be the best for Kindle owners, other ebook readers, and readers in general as well as the various kinds of ink-stained wretches among us. 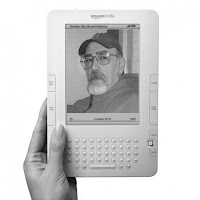 CEO Jeff Bezos was characteristically coy, during Thursday’s Amazon earnings conference call, when he was asked if the company “might unleash the computing power of the Kindle” by adding features that could make the Kindle competitive with netbook computers: “We’re really focused on purpose-built reading devices. We wouldn’t talk anyway about what we’re going to do in the future.”

Amazon may be coy, but CEO Russ Wilcox of e-Ink, the Cambridge, MA company that manufactures the revolutionary display technology used by the Kindle and the Sony eReader, recently provided the Boston Globe‘s Robert Weisman with a detailed, forward-looking chronology in which he laid out exactly what features we can reasonably expect in the Kindle 3.0 and beyond during 2009, 2010, and 2011. Although Amazon has always (during the Kindle’s brief 17-month history) emphasized the Kindle’s primary purpose as an electronic reading device, the company has not been shy about including other features that could, if optimized and augmented over time, appeal to consumers with “convergence device” or “laptop replacement” on their minds. Follow the very detailed Wilcox roadmap and we are looking, within three years, at the Kindle 4 or 5 as “an ideal mobile internet device.”

Perhaps this seems speculative, you say? But think this through with me:

If the e-Ink technologies that Wilcox describes move from prototype to product on the timetable that he describes so specifically, wouldn’t Amazon be foolish not to adopt them for the Kindle? After all, while I have always been clear about my view that the Kindle hardware is a bit of a Trojan horse, a means to Amazon’s real end of maintaining and expanding its leading role as a content retailer as we transition toward more and more digital content, it is essential for Amazon to hold onto the Kindle’s hardware market position for at least the next half-decade if it is to continue to shape and set standards for the Kindle content market. The inherent business propositions are straightforward both for e-Ink and for Amazon: e-Ink would not be investing the R&D money if its most important customer were not interested in the features, and Amazon can’t afford to turn its back on hardware device features that will be adopted by hardware device competitors (even if those devices end up selling Kindle Store content, as I expect they will).

So, here’s what we have to look forward to:

Among other things, I can’t help but mention that if all this comes to pass, the dumbed-down Netbook phenomenon of 2009 will be so over by 2013.

Sometimes, I know, I get accused of shilling for Amazon, or being a Kindle bore, when I throw words like “amazing” and “revolutionary” at the Kindle. But it has been this vision of the Kindle’s future — implicit in nearly every word of the Russ Wilcox video below — that I have been imagining, and writing about explicitly — since the Kindle was launched in November 2007.

Here is the Wilcox video:

But I would be remiss if I did not also point out that there is still so, so much unrealized potential in terms of Kindle software and Amazon’s relationships with Kindle customers and content providers, including:

No doubt it is a lot to manage, but it seems ironic that a company that has never manufactured hardware before would be doing so well on the device itself, yet so poorly on myriad issues in which Amazon has proven expertise that the device’s bed could ultimately be fouled. I hope not.

(For more free news and tips about the Amazon Kindle, subscribe to Kindle Nation, the free weekly email newsletter by Stephen Windwalker, or download a month’s worth of issues to your Kindle for just 99 cents!).

The author was the first to note authoritatively that Amazon sold half a million Kindles by Fall 2008, and the first to predict the Kindle for iPhone App.

Although there are plenty of publishers who haven’t learned from the recent history of the music industry and are afraid of lifting DRM from their Kindle editions, a growing number of authors and publishers are taking a more forward-looking approach. Popular tech author Shelley Powers blogged recently about how DRM restrictions are not an appropriate way to protect copyright:

“Teleread and MobileRead have started a campaign to make these DRM free books more easy to find. If a book is DRM free, just tag it “drmfree” at the Amazon site. It tickled me to be the first to tag my own books.

“My books being offered DRM free doesn’t change how I feel about copyright. I still believe in the importance of copyrights. My books are still copyrighted, at least until the publishers and I decide the time is ripe to release them into the public domain. I am dependent on the royalties I make from my books, and I lose money through piracy of my books. But I have never believed in DRM, which only hurts the legitimate owners.

“I’m currently working on my first self-publishing book, which I’ll be releasing as a Kindle, as well as in other formats. Regardless of how I distribute the book, not one version of the book will have DRM.”

Powers’ publisher, O’Reilly, recently announced that it was making 160 of its book available without DRM in the Kindle Store, with more to follow in coming weeks. Hundreds of independent publishers have now made thousands of titles DRM-free in the Kindle store.

Author Joe Konrath, who we mentioned above because he “gets” the economics of ebooks, is also light years ahead of many of his colleagues when it comes to understanding DRM:

“Not only do ebooks cost too much, DRM is a disgrace, for a myriad of reasons, and the ‘text to speech’ feature is not something the publishing world should be concerned about,” Konrath wrote to Kindle Nation last week.

(For more free news and tips about the Amazon Kindle, subscribe to Kindle Nation, the free weekly email newsletter by Stephen Windwalker, or download a month’s worth of issues to your Kindle for just 99 cents!).

Over 1,200 subscribers and other e-book enthusiasts have participated in April’s first-ever Kindle Nation Citizen Survey, and the results provide fascinating insights into who just who is participating in the e-book revolution and what we think the issues and the future of e-reading. The survey will remain open through April, so you can still click here to participate if you have not done so already, but you can also check the current results here. Once the survey is closed we will summarize the results here in Kindle Nation and share the summary with Amazon’s Kindle Group.

a monthly budget (or to do the same for a family member), why not try a Kindle Gift Certificate each month? Just click here to purchase your Kindle Gift Certificate in whatever amount suits your monthly budget amount, and you’ll know how much you have left to spend just by checking the amount that is open on your gift certificate account at any time during the month. And be sure to reward your frugality by allowing yourself roll-over Kindle dollars!